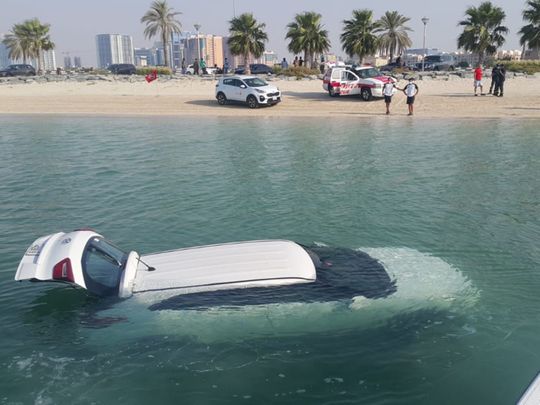 
Dubai: A car drove into the sea at Al Mamzar Beach in Dubai on Friday after its driver failed to put the car in park, an official confirmed on Sunday.  Lieutenant Colonel Abdullah Al Naqbi, the director of Maritime Rescue at Port Police Station, said the command room received an emergency call at 4pm on Friday regarding a car that had driven into the sea.  He said a 41-year-old Arab national female driver was in the parking lot when she lost control and pushed on the accelerator by accident after receiving some sad news over the phone.

“The driver didn’t put the gear in ‘P’ and didn’t use the hand brake,” said Al Naqbi. “The driver received some sad news over the phone and accidently pushed the accelerator making the car drive across the beach and into the water,” he added.

The driver managed to escape from the car before drowning and alerted Dubai Police.  “She didn’t suffer any injuries and maritime patrols with divers went to the scene to extract the car. Waves dragged the car 30 metres into the water and we had to use a winch to extract the car.”  Al Naqbi, urged drivers to take care while driving near beaches and creeks.  Earlier a European man reversed into the sea at Umm Suqeim 2 while trying to launch his jet ski.