Sign in
Welcome! Log into your account
Forgot your password? Get help
Password recovery
Recover your password
A password will be e-mailed to you.
Life Of Arabs A complete guide for those who are living in Middle East or planning to come soon.
Advertisement
Home Saudi Arabia General Information 6.48 Million are Expatriates of Total 8.44 Million Workers in Saudi Arabia 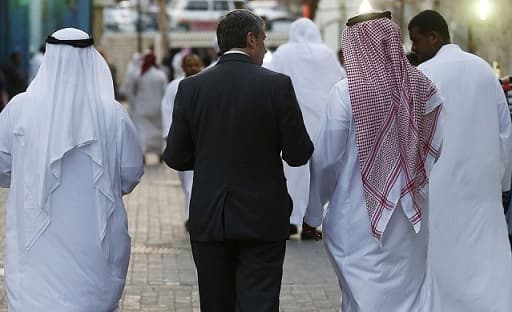 The number of expatriate workers in Saudi Arabia’s private and public sector companies has reached to 6.48 million from the total 8.44 million workers in the fourth quarter of the year 2019 as per the report of Short-Term Business

According to the General Authority of Statistics report, The number of Saudi citizens in private and public sector of the Kingdom has reached 1.95 million workers out of total 8.44 million.  – Expats represents 76.8% of the total while Saudi nationals represent 23.2% of the total workers of the country

The majority of the workers are in private sector companies with a percentage of 96.5% reaching 8.14 million workers, while in the government or public sectors the workers are 298,300 both citizens and expats making a total percentage to 3.5%

It also covered workers, who are on paid vacations, As per the recent statistics report, The number of private and public sector companies reached 1.01 million by the end of the fourth quarter of the year 2019.

The employee compensations includes all dues paid to workers like salaries, benefits and allowances as per the General Authority of Statistics.