Sign in
Welcome! Log into your account
Forgot your password? Get help
Password recovery
Recover your password
A password will be e-mailed to you.
Life Of Arabs A complete guide for those who are living in Middle East or planning to come soon.
Advertisement
Home Saudi Arabia General Information 2 Wives present the gift of “3rd Wife” to their husband 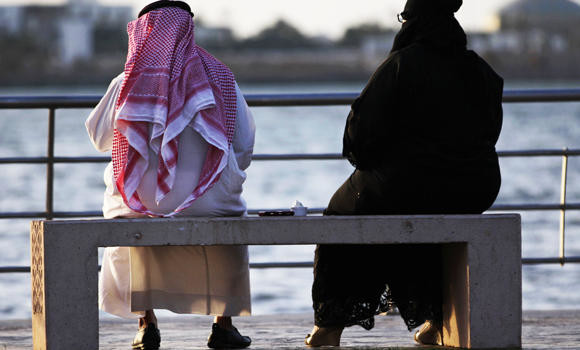 Polygamy is a common phenomenon in Saudi Arabia. Islam has allowed men to keep 4 wives in case they don’t feel content with one, two or three wives.

The compulsion for men is that they should fulfill the rights and needs of all their wives equally. Awad bin Al-Thouaibi – the luckiest person on the planet  Despite conventional jealousy and rivalry customs, surprising news has come from Taif. Two wives of a 70 years old man not only allowed their husband for third marriage but also encouraged him to get a third wife for his bliss.  A 70 years old man named Awad bin Aouaimer Al-Thouaib from Taif shared with media that he was literally shocked to hear from his wives that they want him to get married for one more time. His wives have grown too old like him and suggested him to get another younger wife.  They not only gave him permission but also recommended him several options for a prospective third marriage.

Awad bin Aouaimer Al-Thouaibi is perhaps the luckiest man on this planet and his wives are most generous ones.  The man was given the offer for new marriage by his wife due to their respect and love for him. The strange wives of this man want to keep their husband happy and contented for this purpose they offered him to get a new and young wife.  2648 2 Wives present the gift of “Young 3rd Wife” to the 70 Years old Husband Both current wives made wedding arrangements  They not only made this offer but also arranged all functions of the marriage ceremony. The wedding arrangements were made under the supervision of both wives of this lucky man.  The ceremony held in Taif and guests were all amazed by the generous decision made by thankful wives.

The husband first got a shock of high volts, later he filled with happiness out of thankfulness for his wives for their open heartiness and generous decision.  Special Gift: The marriage ceremony went quite fine and this special kind of marriage amazed many. The wives of a man fulfilled their promise and gifted their 70 years old husband a young and beautiful wife.  2648 2 Wives present the gift of “Young 3rd Wife” to the 70 Years old Husband 02

Honeymoon: As per historical facts, it would be the strangest gift a wife might have gifted to her husband in the world.  The newly married couple went for a honeymoon as well with permission and prayers of two old wives of newly married 70 years old man.  It might be a frowning idea for many women but this news has affected the authenticity of the fact that a wife can never tolerate division in love with her husband.

Example to Follow: Two generous wives of Awad bin Aouaimer Al-Thouaibi have set a clear example that a generous and thankful wife can offer anything to her husband including a new wife. Such incidents are very rare in this world where the majority is occupied with possessiveness and a sense of ownership.  Source: Arab News