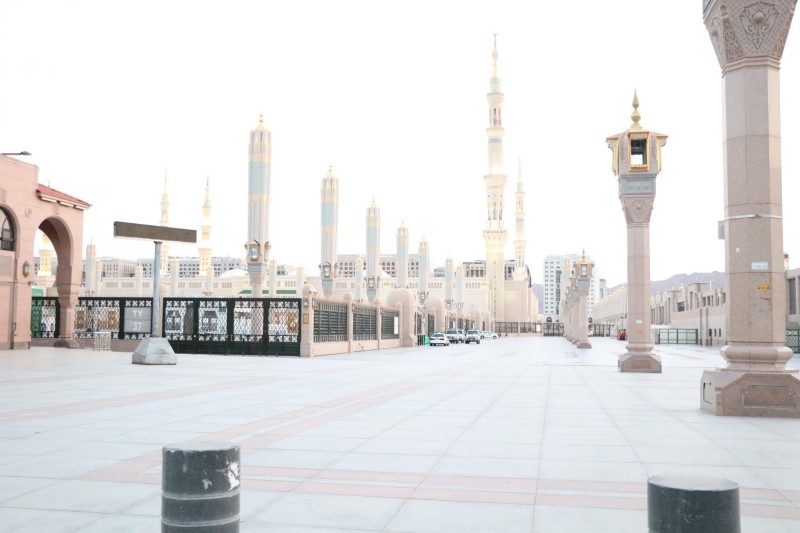 
JEDDAH — Custodian of the Two Holy Mosques King Salman has approved on Friday the opening of the Prophet’s Mosque in Madinah gradually to the public starting Sunday.  The General Presidency for the Affairs of the Two Holy Mosques has completed the plan to reopen the Prophet’s Mosque under strict precautionary measures, limiting the congregation to 40 percent of the mosque’s capacity at a time.  The worshipers will be allowed to enter the mosque from Fajr prayers on Sunday morning (Shawwal 8).  Prayer rugs spread in the Prophet’s Mosque will be removed from the courtyards.

Here are the precautionary measures to be taken for the opening of Masjid Al Nabawi, Madinah. Opening will be in stages starting from Sunday, 31 May, the last stage being opened completely to public.   • The permitted Access of Public in Masjid Al Nabawi, Madinah will be in the the Courtyards and the King Fahad Expansion of Masjid Al Nabawi.  • The Old Mosque and Visitation to the Rawdah and Riyadh Al Jannah will remain suspended.  • The Mosque will be closed as soon as it reaches 40% of capacity.  • Prayers will be performed on marble floors (all carpets have been removed)   • Iftar service will remain suspended  • Parking space reduced to 50%  • Payments on Parking to be made electronically  • Men will be allowed to enter Masjid Al Nabawi through the following gates: Al-Hijrah Gate No. 4, Quba Gate No. 5, King Saud Gate No 8, Imam Al-Bukhari Gate No. 10, King Fahd Gate No. 21, King Abdulaziz Gate No 34, Makkah Gate No. 37). Salam Gate will remain closed.   • Women will be allowed to enter through the following gates: (13, 17, 25, 29)  PRECAUTIONARY MEASURES AND RESTRICTIONS  for Public Entry in Masjid al Nabawi, Madinah from Sunday, 31 May  1. Everyone is required to wear masks 2. Children are not allowed 3. Maintain a gap on a Row from each worshiper. 4. Supply of Zamzam water will remain suspended 5. Mosque will be closed at 40% capacity  6. Iftar service remains suspended. 7.  Visitation to Rawdah and Riyadh al Jannah remains suspended  Aforementioned precautionary measures provided by Harafain Sharifain on Twitter