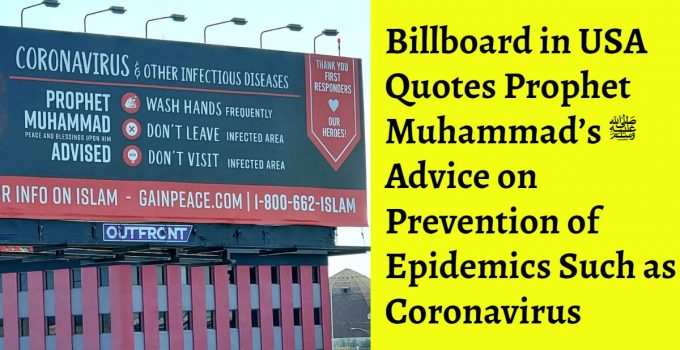 A billboard standing on the highway of Chicago is all of a sudden in news, garnering huge social media attention from the netizens. The message posted on the billboard is attractive and positive in nature, attracting praises and appreciation from Muslims and Christians alike.

The billboard quotes Holy Prophet’s ﷺ instructing regarding protection from epidemics such as plague (or modern coronavirus). Since, the nature of this new disease is similar to the old plague or 7th century diseases, the measures to control and protection is also similar. These instructions are practicable till today and they are similar to the instructions given by WHO to the general people.

The billboard is located in Chicago, Illinois by the O’Hare Airport. The giant board features an animated image of coronavirus at the left side, and a heading at the centre with the text ‘Coronavirus & Other Infection diseases’. The centre or body of the message contains following text ‘Prophet Muhammad (Peace be upon him) adviced:-

While on the right side of the board a message is written cheering the doctors and health-workers who are fighting at the frontline, the text states ‘Thank You First Responders, Our Heroes’. The billboard also invites people to inquire about Islam and Prophet Muhammad ﷺ. This billboard is a good sign that people of America who are largely ignorant about Islam are slowly learning about this blessed religion.

Messenger of Allāh (ﷺ) said (about communicable diseases), “They are a punishment which Allāh sends upon whomsoever He wills, but Allāh has made it a mercy to the believers. Anyone who remains in a town which is plagued with an epidemic, remaining patient and anticipating Allāh’s reward, while firmly believing that nothing will befall him other than what Allāh has preordained for him, then he will receive a reward of a martyr.”

Messenger of Allāh (ﷺ) also said, “If you hear of an outbreak of plague in a land, do not enter it, but if the plague breaks out in a place while you are in it, do not leave that place” (Sahih Bukhari and Muslim)