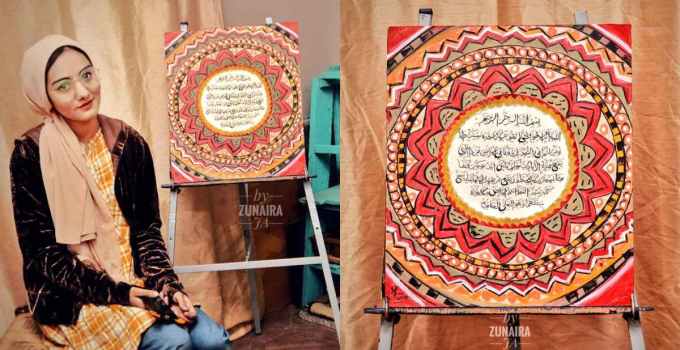 Islamic calligraphy is the artistic practice of handwriting and calligraphy, based upon the alphabet in the lands sharing a common Islamic cultural heritage. It includes Arabic Calligraphy, Ottoman, and Persian calligraphy. And throughout the Islamic history, we can easily witness the presence of beautiful architectures and monuments having the Quranic verses encraved on them.

And till now Muslims have special fascination towards Islamic calligraphy and Paintings. You can easily find beautiful calligraphies in the homes, offices and Mosques of Muslims. Further, in order to meet the growing demands, Muslim youths are considering calligraphies as a career option also.

Recently a Tweet by a Pakistani Calligrapher went viral on the Social Media. She posted her artwork for the followers on Twitter. In the artwork, she has written Ayat al Kursi in Mandala art on wood by working with oil paints.

Let me tell you about Mandala art first. If ever you’ve studied spiritual Asian art, you’ve likely encountered a mandala. A mandala, which is Sanskrit for “circle” or “discoid object,” is a geometric design that holds a great deal of symbolism in Hindu and Buddhist cultures.

Mandalas are believed to represent different aspects of the universe and are used as instruments of meditation and symbols of prayer most notably in China, Japan, and Tibet.In their most basic form, mandalas are circles contained within a square and arranged into sections that are all organized around a single, central point. They’re typically produced on paper or cloth, drawn on a surface with threads, fashioned in bronze, or built in stone. While extraordinary as a standalone work of art, mandalas hold symbolic and meditative meaning beyond their vibrant appearance.

So, the girl took 4 days to complete her work. Her name is Zunnera. She had created this painting and posted recently on her twitter account. The girl seems to be very enthusiastic about her work. For a common person, it’s just a painting but it takes dedication to create such masterpiece.

She has appealed to the twitter that:“I have done my part of work, now twitter will do the rest.”

Her followers were praising her by saying:“Excellent work Zunnera, you make us proud!”

Some said: “Well done. This is a way to show your love towards Islam! Keep it up young lady.Some people said: “This is amazing. I am surprised to see your work. You will soon selected in a good firm”.

There were thousands of such comment that people were posting on her post.The actual thing is that she not only worked hard but she created a masterpiece.

Many people creates art work. Most of them create art work on nature, scenery, pictures and themes. Only very think about creating art work on Qur’an. Indeed, it is her love for the religion which compel her to do so. It is a feeling that comes to the heart to the selected ones.  She has been working hard on her work to create Islamic oil painting. May God giver her success in the both the worlds. Ameen!

Liked our Articles? Want to read more? Subscribe to our Newsletters.