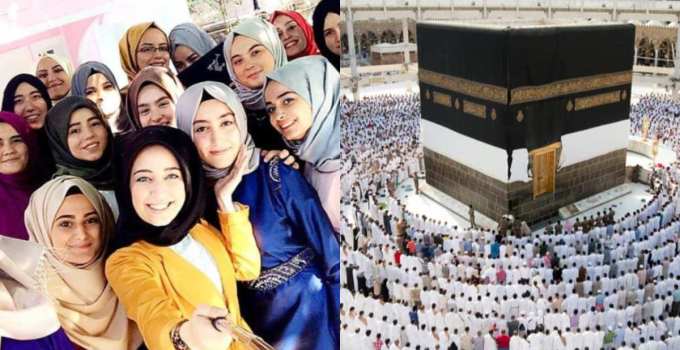 
Islam is the fastest growing religion in the world. It is spreading much more rapidly than other religion. In the future, you will witness Islam as the largest religion of the world. In the next half century or so, Christianity’s long reign as the world’s largest religion may come to an end, according to a just-released report that builds on Pew Research Center’s original population growth projections for religious groups.

Indeed, Muslims will grow more than twice as fast as the overall world population between 2015 and 2060 and, in the second half of this century, will likely surpass Christians as the world’s largest religious group.

The main reasons for Islam’s growth ultimately involve simple demographics. To begin with, Muslims have more children than members of the seven other major religious groups analyzed in the study. Muslim women have an average of 2.9 children, significantly above the next-highest group (Christians at 2.6) and the average of all non-Muslims (2.2). In all major regions where there is a sizable Muslim population, Muslim fertility exceeds non-Muslim fertility.

The growth of the Muslim population also is helped by the fact that Muslims have the youngest median age (24 in 2015) of all major religious groups, more than seven years younger than the median age of non-Muslims (32). A larger share of Muslims will soon be at the point in their lives when people begin having children. This, combined with high fertility rates, will accelerate Muslim population growth.

More than a third of Muslims are concentrated in Africa and the Middle East, regions that are projected to have the biggest population increases. But even within these high-growth regions as well as others. Muslims are projected to grow faster than members of other groups.

The same dynamics hold true in many countries where Muslims live in large numbers alongside other religious groups. For example, India’s number of Muslims is growing at a faster rate than the country’s majority Hindu population. Meanwhile, religious switching which is expected to hinder the growth of Christians by an estimated 72 million between 2015 and 2060 is not expected to have a negative net impact on Muslim population growth.

To bring the report in understandable nutshell, we have distributed it under few subheadings and these subheadings very well tell the factors which are contributing in the growth of Islam.

Muslim produces offspring thrice the rate of other religions. As Christian, Hindu, Jews and many others mostly did not produce more than 2 offspring, there growth rate is equal to the birth rate. Their population remains the same. Whereas Muslim produces two, three, four and even five.

As different people are taking interest in Islam, they are studying it and when the truth reveal on them, they accept Islam. It is happening in the U.K and US. Thousands of people are accepting Islam every year.

Muslim according to their laws, get married one, two, three and even four times as followed by the religion. This give help to growth rate as at the same time where christian are producing one offspring, Muslims are producing two or more.

Restrictions to produce offspring in other societies

Many advance societies such China and few other has imposed a ban on producing more than one offspring. As a result, they are getting short of young people. Many aged people are working at two places at a time but resulting in low youth as well as overall low population.

Thousands of people are fed up with Christianity. The reason is simple. They did not belief that what they are doing is all true. Because they did not a have strong relation with the God as Muslim have when they pray and do Dua, so they felt empty and missing something really important. In search of finding the truth. They easily find Islam as a true religion.

A lot of Non-Muslim become very impressed with the way of Muslim spend their lives. The way they pray and visit Masjid on a daily basis, follow their religion really impress them and they accept Islam.

Islam is the only religion which is present in every corner of the world. There is no city in the world where Muslim is not present right now. Due to the fact, hundreds of people accept Islam.

Lack of peace in different religions

When people study different religions, they did not find peace, comfort and relaxation of mind. As they are following a wrong religion, they at some stage of their lives, get the idea that they are not at the right path. Actually, their religion has nothing regarding their lives. They don’t know why their made and what is the process of their lives. They got frustrated from the lives and many felt depressed. They struggle to find the true religion. They read different books and different religions. In the end, they find Islam is a complete religion and show them the right path to spend their lives.