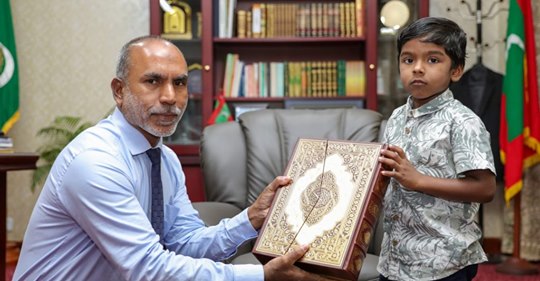 The Islamic Minister Dr. Ahmed Zahir Ali has commended Yousuf Bin Mazin, the six-year-old boy who has learned the Holy Quran by heart, on his remarkable achievement.He also hosted Yousuf, along with his parents, for a meeting at the Islamic Ministry headquarters in Maldieve

In addition to commending Yousuf and congratulating his parents, Dr. Ahmed Zahir presented the young boy with a gift.Yousuf is scheduled to recite the Quran in front of the Center for Quran’s committee before he is guaranteed a place on the official list of local Hafidhs(The Memorizer of Qur’an).It’s mentioned in the Holy Qur’an in the verse15:9,“Indeed, it is We who sent down the Qur’an and indeed, We will be its guardian”.Yousuf has made a history by becoming the youngest person to learn the Holy Quran by heart.