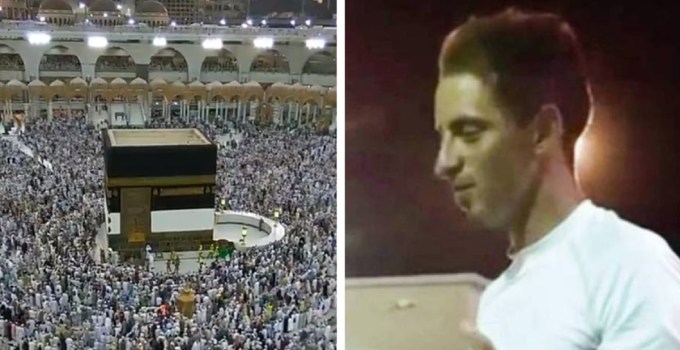 Hajj is one of the five pillars of Islam and is a ritual established by Allah since the times of Prophet Abraham (Peace be upon him). When it is performed in the month Dhul Hijjah, it is known as Hajj and when performed in other months it is known as ‘Umrah’.

The holy sites of Makkah remain crowded with the pilgrims throughout the year while the magnitude of the crowd increases in Dhul Hijjah tremendously because of the significance of the Hajj and its immense reward. This is the story of a Spaniard boy who walked around 9000 km to perform Umrah in Makkah.

The Spanish Muslim named Ishaq planned this great journey and started from the French Capital, Paris. As per Kuwaiti newspaper Al Rai, Ishaq walked from Paris in Europe to Makkah in Saudi Arabia and took with him 5000 euros which he spent on his way making a provision of approximately 10 euros for each day. He refused any kind of financial support from anyone on his route to Makkah.

The route or countries which he crossed is unknown to us but one thing is sure that the path wasn’t easy at all for him. He met harsh weather conditions and particularly the main challenge was related with the crossing of high mountains. At one time, he had to face a snow storm and had to hide inside his small tent. His hands and feet got numbed due to the severe cold climatic conditions.

As of 2016, Spain officially had 1,919,141 Muslims out of a total population of 46,438,422, or slightly above 4%, of the total population. There are about 1400 mosques in Spain as of 2016 (which according to the Observatory of Religious Pluralism in Spain represents approximately 21% of all places of worship of any denomination in Spain).

A capacity of 60,000 worshipers .. Learn about the opening dates of the Prophet’s Mosque during the month of Ramadan

LifeOfArabs - April 7, 2021 0
The General Traffic department (Moroor) in Saudi Arabia explained that paying traffic fines is a condition for conducting any transactions on the...