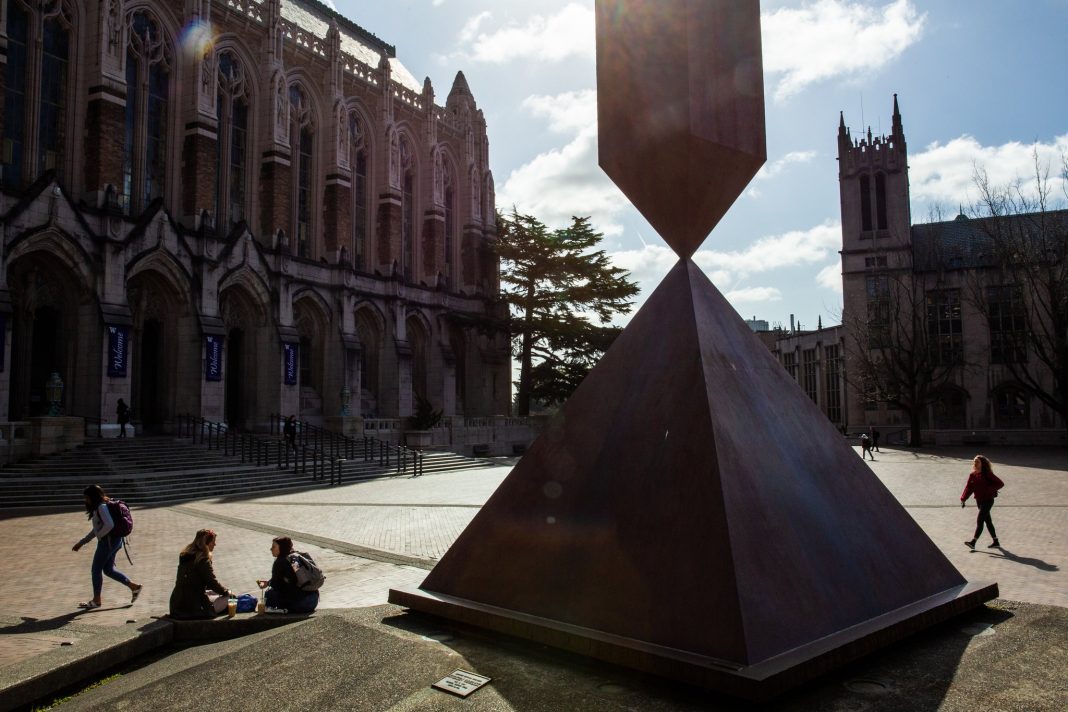 The University of Washington is moving to online classes for its 50,000 students. With colleges nationwide about to empty for spring break, students fear they might not be coming back.

SEATTLE — The University of Washington said on Friday that it would cancel in-person classes and have students take courses and finals remotely while the Seattle area grapples with a growing coronavirus outbreak, in a move that other colleges around the country are preparing to follow if the virus becomes more widespread.

Over the last few days, a growing number of universities have mobilized emergency planning teams to envision what a shutdown would look like, especially if students bring the virus back with them from spring break, which starts Friday on many campuses.

Already, some students have been warned that they should be prepared to learn online, as many students studying abroad in Europe and Asia have been forced to do. At Stanford University, officials announced late Friday that classes would not meet in person as of Monday, and that any looming exams would be changed to a take-home format.

The level of concern rose on Thursday with the announcement that a junior at Vanderbilt University in Tennessee who had been studying in Italy had tested positive for the virus after his study abroad program was canceled and he returned to his hometown, Chicago. The University of California, Los Angeles, also said three of its students were being tested and self-isolating off campus.

“I’m like on the run from the virus,” said Zara Khan, a junior at the University of California, Berkeley, who left a study abroad program in Florence for London five days ago. “I could go back to the States,” she said on Friday, “but that’s not even safe anymore.”

The University of Washington, with 50,000 students on three campuses across the Seattle region, was apparently the first large college in the United States to make the shift entirely to online classes amid virus concerns. It said the change would begin Monday and continue through the remainder of the winter quarter, which ends March 20. The university’s president, Ana Mari Cauce, said she was hopeful that normal classes would resume during the spring quarter.

The announcement was the most sweeping decision yet for leaders in the Seattle area rushing to contain the spread of the coronavirus, which has been linked to at least 14 deaths and 84 infections in the state.

“Our goal is to complete this academic quarter with as little disruption to our students and their educational progress as possible,” Ms. Cauce said. The university also announced on Friday that one of its employees had tested positive for the coronavirus but said the decision to close classrooms had been made before that.

Seattle University, with about 7,300 students, also said it would move to online classes for the rest of the winter quarter, and Northeastern University in Boston will do the same for students on its Seattle campus. The Lake Washington Institute of Technology’s 6,000-student campus in Kirkland, Wash., shut down for cleaning after several students and faculty members visited a nursing home near Seattle where many coronavirus cases have been confirmed. And in New York City, Yeshiva University canceled classes on two of its campuses until March 10 after a student tested positive for the virus this week.

Other universities have warned their students to be prepared for similar actions if they become necessary. Duke University sent a campuswide alert on Thursday laying out extensive guidance for students leaving for spring break, advising them to avoid unnecessary travel and stay away from events or venues with a lot of people.

The note said the school was bracing for the possibility that on-campus classes would have to end if a student or teacher got infected, and students could be forced to finish the semester remotely. “We hope this will not be necessary but want to be prepared,” Duke said.

Concern that classes could be canceled after spring break is rampant on many campuses, with shutdown rumors spread from student to student by text message and reinforced by professors who have been told by administrators to start thinking about putting their classes online.

An email sent by the dean of Yale College on March 3 caught the attention of some students when it said, “And if you will be traveling home for spring break, consider bringing any items you will want with you if your return to campus is delayed.”

When some students began to interpret that as a warning that the school could close, Yale officials denied any plans to close and warned against spreading panic.

“In making any decisions about new actions we might take in response to Covid-19, such as the implementation of social distancing or a full or partial closure, Yale leadership will rely on guidance from federal, state and local authorities, and from our own faculty and staff experts,” said Karen Peart, a Yale spokeswoman.

But students and professors said it was hard not to think that spring break could be a turning point.

“Spring break is actually what’s making the timing of the spread especially alarming, because everyone’s leaving,” said Kahlil Greene, Yale’s undergraduate student body president. “Everyone’s dispersing and then everyone’s coming back together. In many people’s minds, that makes it more likely that something is going to happen on campus.”

Some colleges are encouraging students not to travel. Schools like Duke, New York University and the University of Chicago are asking students and faculty to register their travel plans, even locally, on a web-based form developed for emergencies like earthquakes and terrorist attacks. And many universities have canceled school-sponsored spring break trips abroad.

Many universities are also discouraging trips to China, Italy, Iran, South Korea and Japan, where the infection is more severe, and asking students and faculty members to isolate themselves for two weeks if they return from those countries.

Syracuse University said on Friday that it was watching travel warnings from the federal Centers for Disease Control and Prevention closely, and would re-evaluate whether to continue study abroad programs in places like the United Kingdom, Spain, France and Chile.

Alexandra Lupo, a junior at Fordham, had been in Italy for about two months studying in Florence, a popular destination for study abroad students interested in art and culture, when she learned that her program was being shut down.

The coronavirus was spreading, administrators said in a surprise meeting. Everyone should leave the city by March 1.

Instead of giving up and going back home to New Jersey, Ms. Lupo decided she would fly off to London with a friend she had met in the program. Over spring break, she and her friend will be traveling to Amsterdam and Dublin.

“I’m lucky I was still able to do that with everything that was going on,” Ms. Lupo said.

Not every student studying abroad was so fortunate. Several N.Y.U. students bound for Shanghai saw their program canceled after the coronavirus swept through China, so some transferred to Florence — until it was shut down.

Since returning from Italy to her home in Weston, Conn., Molly Morris, a student at Lafayette College in Easton, Pa., has been following her doctor’s advice to stay away from other people and monitor her temperature. She is not allowed to go to the grocery store or exercise class.

After her isolation period, at the end of next week’s spring break, she plans to go to New York City for her mother’s birthday, to visit some museums and restaurants.

Some students are hoping to salvage at least the minimum accomplishment of getting credit for their courses through online learning. But students and instructors alike describe the remote courses as improvisational and primitive.

“It’s a bit of a disaster,” said Marilynn Johnson, a history professor at Boston College whose study abroad program in Venice was shut down. “I feel like I’m teaching out to the void.”

But it may be good preparation for what is to come.

“Everybody’s making contingency plans back in the U.S. over spring break,” Dr. Johnson said. “I think people are anticipating that the same thing may happen in the U.S. that’s happening in Europe. They’re suddenly going to come back and find out that there’s a ban on large gatherings, and that the universities have suspended in-person classes.”

Her colleagues, she said, are posting “tips and tricks” for online teaching in a shared Google Doc.

One professor in Florence, who was teaching an Italian language immersion class until his students left, has been going around the city filming scenes and using them for his online lessons. “He’s a funny man, so it’s funny, but it’s sad we’re not there,” said Ayden Mallory, an N.Y.U. student who returned from Florence. But she is finding it hard to motivate herself to study Italian when she is in “cold, cold Boston.”

She thinks about how this whole episode will seem when she looks back on it some day. “I feel sometimes sad, sometimes angry, sometimes laughing,” she said. “But it also feels monumental as well.”

So far, No cases of Monkeypox in Saudi Arabia, Know more about this disease