Sign in
Welcome! Log into your account
Forgot your password? Get help
Password recovery
Recover your password
A password will be e-mailed to you.
Life Of Arabs A complete guide for those who are living in Middle East or planning to come soon.
Advertisement
Home Saudi Arabia General Information The Largest women’s driving academy opened in Al-Ahsa, Saudi Arabia. 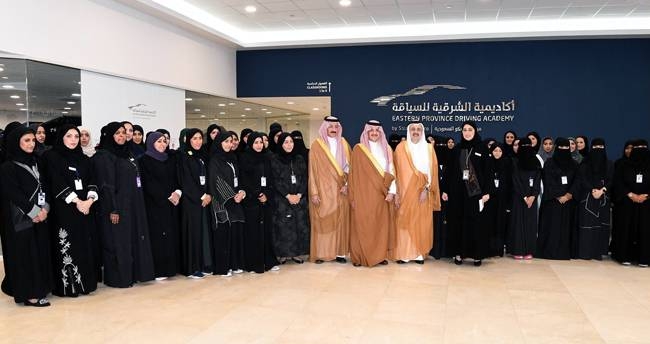 AL-AHSA — Prince Saud Bin Naif, emir of the Eastern Province, inaugurated on Wednesday the Eastern Academy for Women’s Driving here. This is the first integrated driving academy for women in Al-Ahsa governorate that was implemented as part of the social responsibility initiative of Saudi Aramco.

Prince Badr Bin Muhammad, governor Al-Ahsa, and Chairman and CEO of Saudi Aramco Eng. Amin Al-Nasser were among the dignitaries who attended the event.

Speaking on the occasion, Prince Saud praised the care and attention of Custodian of the Two Holy Mosques King Salman and Crown Prince Muhammad Bin Salman to empower Saudi women and stimulate their energies and capabilities.

He highlighted the importance of developing the process of learning to drive, integrating modern technologies, and ensuring the establishment of a traffic safety culture. The emir lauded the Saudi Aramco’s drive in the service of the society, and development of capabilities of women in Al-Ahsa.

“The participation of the public and private sectors in development and social responsibility is a necessity with a focus on needs and exploring capabilities,” he added.

Eng. Al-Nasser said the historic decision of King Salman to allow women to drive as well as to empower millions of women in the Kingdom would have a positive impact on the economy and on the business environment in the Kingdom.

“The driving academy would have a tangible positive impact and benefit a large number of citizens as it will meet two things of what Saudi Aramco focuses on — the empowerment of women, and traffic safety.

The academy is the first of its kind in the Kingdom and the Middle East in terms of size, quality and smart technologies used, Al-Nasser said, adding that the company looks forward to train as many as 200,000 women over the next ten years. The academy has more than 250 Saudi women employees as trainers and lecturers.

The academy building spreads over an area of about 3,500 square meters, while the training field area is 50,000 square meters. There are 115 vehicles and 11 interactive simulators along with five smart classrooms, hall, daycare facilities, clinic, online test room, conference room, and call center.