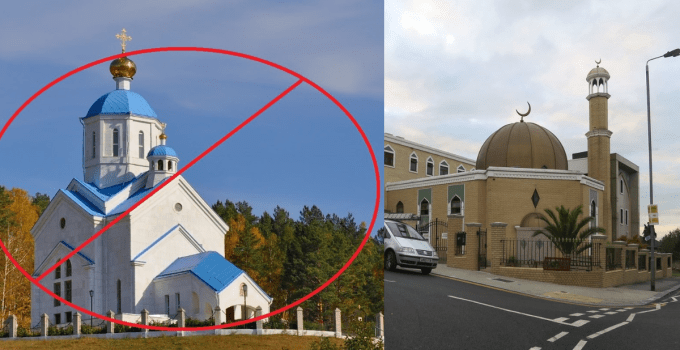 Islam is a religion which is destined to dominate, It is the religion of Allah, The Owner of the world. Allah has promised it in Qur’an

“It is He (Allah) who has sent his Messenger (saw) with guidance and the religion of truth (i.e. Islam), in order for it to be dominant over All other religions, even though the Mushrikoon (disbelievers) hate it.” (at-Tawbah, 9:33)

Islam in western hemisphere has grown rapidly in the 20th century and still growing at full pace. As per Pew research center report, there are more than 3.5 million Muslims in USA and Islam is the second largest religion in the US. While Muslims in UK are around 3.3 million and is the fastest growing religion in the UK.

The growth of Islam can be measured from the fact that “Churches are being replaced by Mosques in London”. Yes, It is absolutely true.

500 Churches are closed since 2001, and 493 Mosques are opened & built at their place. The reason behind the closure is the reducing number of Christians attending the Churches while the increased number of Muslims in UK and their devotion to attend prayers regularly led to the opening of Mosques.

Many Churches are officially converted into Mosques by the authorities in London. A number of iconic and historical Churches are now Mosque and people are attending prayers 5 times a day.

According to a research, by 2020 the number of praying Muslims will increase by 6,83,000 and the number of Christians attending Churches weekly will be reduced to 6,79,000 in London.

British Mosques are proliferating like no other mosques around the world.

The number of Christians in Churches of London are rapidly decreasing due to multiple reasons such as lack of devotion, increase in Muslim converts, youth are becoming atheists & widespread corruption in Churches.

For example, At the Church of San Giorgio, designed to accommodate 1,230 worshipers, only 12 people gathered to celebrate Mass. At the Church of Santa Maria, there were 20. While the nearby Brune Street Estate mosque has a different scene: overcrowding. Its small room can contain only 100.

Muslims have shown a complete devotion to Allah and adhered to every principles of Islam. Mosque is an important institution in the Muslim community thus increasing Mosques in London is no more a wonder.

The Churches are now operated into private homes and small places due to lack of gatherings while those Churches which boasted Christian dominance are now Mosques, the place of Allah. SubhanAllah

Alhamdulillah, the situation in other cities of UK are also same, Muslim population is rapidly growing in other major cities of Kingdom such as Manchester (Muslims, 15.8%), Birmingham (21.8%), Bradford (24.7%). There are many projections which shows Islam will be the largest religion of United Kingdom in upcoming days.

Despite growing hate crimes & Islamophobia Muslims aren’t afraid at all. Moreover, they are becoming much stronger as Islam teaches to keep faith in Allah and be patient.