Sign in
Welcome! Log into your account
Forgot your password? Get help
Password recovery
Recover your password
A password will be e-mailed to you.
Life Of Arabs A complete guide for those who are living in Middle East or planning to come soon.
Advertisement
Home Saudi Arabia General Information Muslim Superstar Akon Performed Umrah on His Trip to Saudi Arabia 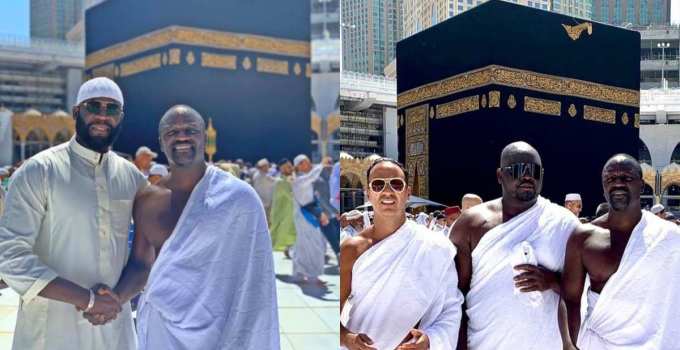 Akon has sung songs in other languages including Tamil, Hindi and Spanish. He was listed by the Guinness Book of World Records as the #1 selling artist for master ringtones in the world.

He has released 6 solo albums and has handled the majority of production on his solo work and guest features. Alongside this, he also produced records mainly for artists on his respective labels, as well as for other artists.

Recently he visited Saudi Arabia and shocked the world when he performed ‘Umrah’ during his visit. The renowned singer concluded his concert in Saudi Arabia. He recently performed in a grand concert in Jeddah. After the conclusion of the concert, the singer went on to perform the religious ritual of Islam. He went to Makkah and performed Umrah. He revealed in an interview that:

“The reason behind my success is faith on Almighty Allah and by following Islam.”

His pictures and videos swarmed the internet, in which he can be seen in traditional religious white wear in front of Kaaba in Makkah’s Grand Mosque. Other members of his family and friends can also be seen with him.

The pictures went viral and numerously shared by different platforms on social media. Muslim were over joyed when they saw him and he was praised on this act. People on social media are congratulating him for his ritual. The videos are surfacing on social media.

The 46-years old, who is a Muslim by birth, but most of the people don’t know that he was born to a Muslim family. Pictures and videos that are surfacing on social media are surprising people in which the singer is performing different rituals of the Umrah including Tawaaf.

On one occasion, he expressed himself and opened up about his religion and said that Islam is the key behind his success. He gave a big lesson the Muslim Ummah that even if you reach “Mount Everest” still don’t forget your religion because one day you have return and this life is temporary.

He is a kind and caring personality. He is also keen to help people who are in need. He said that Allah has granted him wealth and he wants to spend it on the needy. May Allah accept his deed!

Akon was on tour in Saudi Arabia, he posted the concert picture on his Instagram, which reads, “Saudi Arabia was crazy!! Thanks again Saudi for the love once again.”