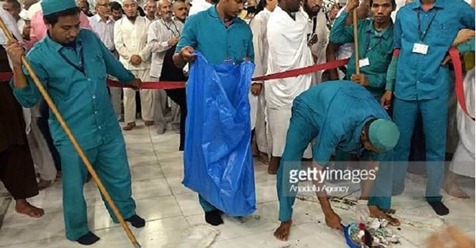 
Yesterday, while performing Umrah with my mother-in-law in Masjid al-Haram, I notice something amazing. During my first round of tawaf, I saw one of the cleaning staff in Mataf playing with his cleaning brush.

I noticed a Haram cleaner doing some abnormal acts: I noticed his abnormal acts from far behind and when I reached near to him, I saw that he was playing with an insect. I cannot specify the species perfectly but it was some kind of insect with the size of a cockroach.

What was he doing? I slowed down the wheelchair of my mother-in-law to observe what he was trying to do with the little insect. He was not touching it with his brush but only directing it by blocking its way to go to an isolated place within the Mataaf on the second floor.

It was quite amazing for me as I was not able to understand the reason he was doing this. I mean, he could kill it very easily and drain its body into the gutters but he didn’t do it. As he was still busy with the little creature, I decided not to disturb him and moved forward.

Second round of Tawaf: My mind was in a dilemma to ask him the reason of doing it or just close the topic in my mind. While making the second round of Tawaf on the second floor, I found the same guy again on my way. This time he was standing still, cleaning floor just like any other cleaner in the Haram.

Out of curiosity to know the reason, I parked the wheelchair of my mother-in-law and approached him with the question. He looked at me with suspicious eyes for a portion of a second followed by a smile.

Why don’t you kill insects at Masjid al-Haram? There are 2 kinds of insects we normally see at Masjid al-Haram. The insects which are harmful to the human beings like snakes, scorpions, and centipede, we don’t give them a moment to escape. We are instructed to kill them immediately as they may harm the pilgrims in the Haram.

3 reasons we don’t kill insects: There is another category of insects which are not directly harmful to human beings. We don’t kill them due to the following reasons.

Have Saudi authorities stopped you from doing all this? I asked this question from the Haram cleaner, he smiled at me and decided not to answer.

My reaction: I was really impressed by the answer he communicated to me. How sensitive he has been while performing his duties. He is just a cleaner in the Masjid al-Haram but has greater values than many so-called educated people in the outer world.

While the outer world has been killing human beings like insects, they care about these little creatures. God bless you, my Brother!