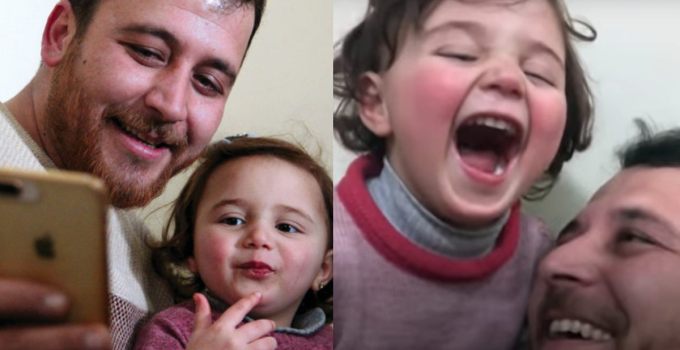 
Indeed the most painful story of this decade is here. A Syrian refugee in the midst of warfare has turned his horrific circumstances into a game to protect his young child from trauma. Most children would cry out in fear if they hear falling bombs. But Abdullah Al-Mohammad’s three-year-old daughter Salwa laughs. The conditions are getting dangerous for the Muslim families as they are stuck in wars.

Every single day, there are jet fighters throwing bombs on the civilians. They even did not spare hospitals, schools and religious sites. Thousands of families have been killed and displaced in this war. This family have been forced to flee their home in Saraqib – a city in the eastern countryside of Idlib due to the Syrian civil war.

Right now, they are living at a friend’s house in a town in Idlib province, called Sarmada, where they are still surrounded by near-constant exploison. This father is doing his best to save his daughter from trauma or fear.

In an effort to protect Salwa from the “psychological crisis” that he has seen other children in the community endure, Mr Al-Mohammad chose to turn the terrifying noises into a game. Every time a bomb falls, he pretends the noise is a firework or toy gun.

Mr Al-Mohammad told: “She is a child who does not understand war. I decided to teach Salwa this game to prevent her psychological state from collapsing. So as to not be affected by diseases relating to fear.

He told the story that Two years ago on the Eid, the kids were playing with fireworks and one of the kids was playing with a big one which they called “stones”. The moment that “stones” exploded, the young girl got scared. He immediately carried her to the balcony and showed the young girl that there is nothing to be scared off. She saw the kids playing with them. So, the father asked one of those kids to light another one for his daughter so that she could see it for herself.

So, the moment it exploded, the kids started to laugh loudly and she as well started laughing. And she understand that it was just a game. Two days later there was a bombing, so he told her not to be scared as you know the kids were playing with fireworks again. From there he started this trick with her.

The video has been breaking hearts on Twitter, Facebook and Instagram which have left netizens speechless. The video comes in the wake of heavy bombing in Idlib, one of the last opposition-held strongholds in Syria. What is being seen as one of the worst in a series of humanitarian crises in Syria’s 9-year-long conflict that has left over 500,000 dead!

What a sad world, to distract 4-year old Salwa, her father Abdullah has made up a game. Each time a bomb drops in Idlib, Syria, they laugh, so she doesn’t get scared. This is an alarming condition for the Muslim as Israel and its Allies are targeting the Muslim majority country.

It happens when Muslim starts fighting with each other on petty issues. This is a lobby used by the Israeli to distract the Muslims. They admitted that they have destroyed 3 Muslim country Libya, Yemen and Syria in just six months. They planned all this years ago. They use different tactic to destroy Muslim country.

They are not stopping yet. They are now planning to attack other Muslim countries as well. In the past, they tried their best to start a war between Iran and Saudi Arabia by hitting their oil reservoirs and destroying them and putting the blame on Iran.

May Allah protect each and every Muslim in this world and make it easy for those who have gone through the trauma of wars. Aameen