Sign in
Welcome! Log into your account
Forgot your password? Get help
Password recovery
Recover your password
A password will be e-mailed to you.
Life Of Arabs A complete guide for those who are living in Middle East or planning to come soon.
Advertisement
Home Saudi Arabia General Information Plane forced to turn back as a mother forgets newborn at Jeddah... 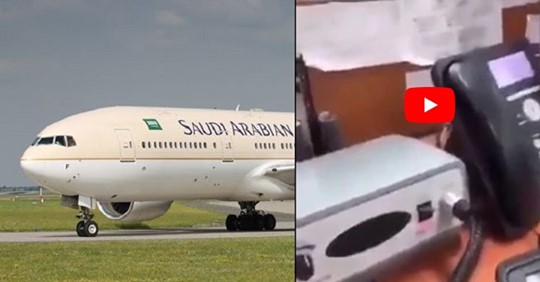 According to reports, flight SV 832 of Saudi Airlines was forced to land back to Jeddah Airport after a mother told the cabin crew that she has forgotten her newborn baby at the airport. It is not unusual for travelers to forget some of their belongings at the airport, but this was something extraordinary.

Gulf News reported that the mother didn’t realize that she is not carrying her newborn baby with her until the aircraft had taken off. As soon as she realized about her missing baby, she informed the staff and pilot had to take a U-turn to the Airport.

As a result, flight SV 832 which was heading to Kuala Lumpur was returned back to Jeddah. After the incident, a video went viral on social media of the communication between the pilot and the control tower. We have translated the content of the video for our users.

The communication between the Pilot and the Air Traffic Controller

“May God be with us. Can we come back or what (sic)?” the pilot was heard talking to the air traffic controller.

The operator, after taking the flight number, is heard asking another colleague about the protocol.

“This flight is requesting to come back…a passenger forgot her baby in the waiting area, the poor thing.”

The operator then asks the pilot to re-confirm the reason for turning back.

The pilot was overhead speaking: “We told you, a passenger left her baby in the terminal and refuses to continue the flight.”

“Ok, head back to the gate. This is totally a new one for us!”

The response on Social Media

While the woman was criticized on social media for her irresponsible behavior, people took the opportunity to praise the pilot for his humanity. How on earth is it possible that somebody forgets her infant at an airport? Indeed, it is a matter of grave negligence on the part of the mother.

Obviously, he took the decision to return the flight back to the airport considering it an emergency situation as there was no one at Jeddah airport to take care of the baby. The immigration procedures were already done and no one could take the baby back to the city.