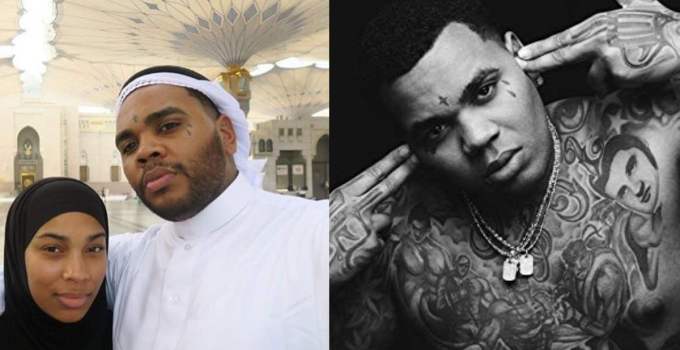 Hip-hop artists are reverting to Islam rapidly compared to other genres of music. If you look into the list of prominent American hip-hop artists, you will find many Muslim names. Ice Cube, Nas, T-Pain are few examples.

Marcellus Kevin Gates, better known as Kevin Gates is an American rapper, singer & entrepreneur from Baton Rouge, Louisiana. He opened up about his faith in a series of video, where he & his wife shared their true meaning of faith.

Dreka told that they had been Muslims their entire life without even knowing it. Islam is not a sudden phenomenon in their life which just popped up from somewhere and they adopted it. Rather they observed that the way they were living was as same as a true Muslim lives, the only gap being affirmation of faith i.e., Shahadah.

They fulfilled the gap by taking Shahadah affirming their belief in Allah and His final Messenger, Prophet Muhammad (Peace be upon him). He also answered the questions related to tattoos in his body which is haram in Islam, he jokingly replied, “I am going to do lots of Haram and fill my body with it.”

Though he admitted that tattoo is not so welcoming in Islam, he focused on the purity of soul and hinted that purification of soul is primary in Islam while everything is secondary. If your soul is pure you are mostly likely to lead a successful life.

Kevin Gates also spoke about his previous faith i.e., Christianity. He said he never had the vibes whenever he went to Churches and always felt lack of spirituality there. Dreka was a step ahead than him, she told that she never went Church after the age of 12 and instructed her mom to not to force her.

He also mentioned how wretched his life was before; doing drugs all the times, no peace no tranquility and how Allah saved him from that life to a peaceful and blessed life. He recited Shahadah to reiterate his firm belief in Islam.

Dreka and Kevin, both are devout Muslims now and they went for their pilgrimage to Mecca. Visiting Mecca for Hajj is always a thrilling experience for every Muslim.

In his visit to Mecca, Kevin felt a unique spiritual experience when he was invited to kiss the black stone or Hajr al Aswad. He shared this unique experience through a video where he & Dreka were approaching the stone.

He also told that how an unknown guard whom he never met before invited him to kiss the stone.

“This man I have never met before embraced me as if we had known each other our entire lives. He is one of the greatest Muslims I have ever met in my life. #AllahuAkbar”, he captioned the video.

He also added, “To be healed is to be healed from all the things. I will never forget this day in this life and hereafter. May Peace be Upon You all.”

He can be seen quivering while touching the stone like if he was crying in the video. Even if he was crying then it is no wonder because Masjid al Haram is a place designed to do so. The burden of sins and hope of Allah’s mercy bring tears to every sound human being.

May Allah have mercy upon Kevin and Dreka and on all of us. Aameen