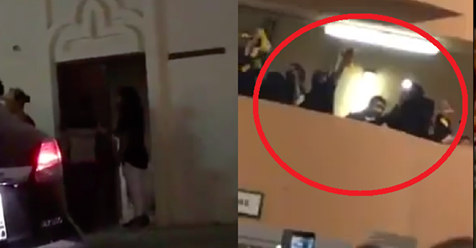 
A few days ago, a video caused Saudis attention. A video was filmed that showed a couple of men harassing women openly in the streets. The street which was identified as the Dorrat Al Arous is located in Jeddah.

Not only the video became trending in Saudi Arabia, but also caused many to raise voice against the unjust acts against women. The people on social media demanded justice.

The issue became a serious one and the Prince Khaled Al Faisal, who is the governor of the city of Makkah, calmed down the outraged people by ordering an investigation into the matter.

There was a number of videos filmed of the scene where it is clearly seen that a bunch of men publically harassing women. These videos were the biggest clue for the police to reach these social criminals. The police held the investigation and identified these men.

In videos, it has been seen that the women who were walking by streets were chased by groups of men. Some men even pulled their Abayas and bullied women who were hiding in fear. Such videos were a shame.

People on social media cursed these men and asked authorities to take action. The police have now confirmed that these 7 men who were involved in harassing women in Jeddah have been arrested. The arrest news has let people calm down and of course women of Jeddah to take a breath of reliving.

People on social media have praised the Saudi authorities to have taken notice of the incident and not ignoring it. They praised the efforts of the authorities and recognize the fact that the officials are now more committed to coping out the harassment in Saudi Arabia.

People claim that sexual harassment is a crime that should be severely punished. The women of Saudi Arabia are to be respected and no man has a right to abuse their rights.

Our authorities have done a great job of capturing the criminals yet the punishment is still to be announced. They shall be severely punished for good. The current state law does not recognize sexual harassment a criminal based activity.

However, King Salman has issued a royal decree on the very matter. Soon, the state of Saudi Arabia will announce sexual harassment as criminal activity as the law is being drafted.

Indeed Saudi Arabia is looking forward to dealing with the matter seriously. This is something great. With sexual harassment being criminalized, our women shall face protection at work and in public.