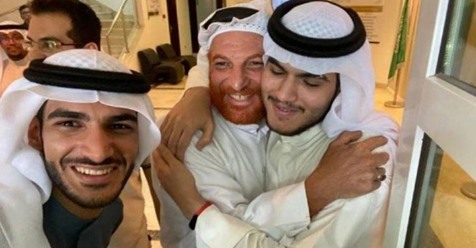 24 years ago, in 1996 a shocking incident took place in Saudi Arabia when two newborn baby boys were kidnapped from the Hospital. This incident shook the entire country: there were investigations being carried out and there was a fear of newborn’s abduction across the country.

He was kidnapped within 3 hours of birth

Unfortunately, the Saudi Police could not rescue both the children and their parents were left with the utmost pain.

Moussa Al Khanezi was abducted only 3 hours after his birth from the Maternity and Children’s Hospital in Dammam, Saudi Arabia.

The woman came in and asked to take away the boy to get him washed and never returned with the baby boy. The other boy was kidnapped in 1999 by the same woman.

The kidnapper raised them well

She raised them all by herself telling them that they had been born out of wedlock and were hers. The woman whose name has not been disclosed is in her fifty’s and is with the police. She holds Saudi nationality.

She, however, denies abduction accusations and claimed that she found these two abandoned boys and decided to raise them.

How did the police catch her after 24 years?

The police were able to get hands-on her only when she applied for the identification cards. Both the boys are in their twenties and thereby it was a drill for the police to link the case.

Thereby the police conducted DNA tests of the boys to get assured of their identification. To their surprise, none belonged the woman and one of them was Moussa al-Khanezi, the boy who was abducted.

Allah reunited them after 24 years

His father, Ali, had conducted searches for him and had even placed hefty rewards for one who would return him. Yet, it was Allah’s will that they got reunited after 24 years.

The boy is more than happy: he is finally reunited with his biological family. He does not like to speak much about his past or about his relationship with the woman, as he wants to enjoy this time. He is meeting his family after 24 years and it’s like a new life for him.

Trending Now  The “Islamic Affairs” directs the collection of the Tarawih prayers and the qiyaam with the Isha prayer, not exceeding 30 minutes

An interview with the TV program

While talking in a program “Yahala” on the “Rotana Gulf” channel the boy said that the lady who raised her lodged a complaint three years ago and the procedures were completed.

He only found 10 days earlier that he had a family. This is the best thing that has happened to him: he has found his family.

The kidnapper was so kind to her

He however in an interview has made it clear that he has no harsh feeling for the mother who raised him. It is unsure if she is the one who really abducted him.

He recalled an event saying that he wanted a car to fulfilling his transportation needs. On learning that he had little money, the woman offered him a bag full of gold and gold rings. She emptied her hands for his wish.

The other boy is also rescued

Al Qadri told me that he is more than happy to get reunited as he had grown up being told that he is an orphan. He thanked management and security for all their help and support.

LifeOfArabs - April 8, 2021 0
Breaking News: Entry to the Prophet Mosque and its squares only for those who received the first dose of Corona Vaccine starting...