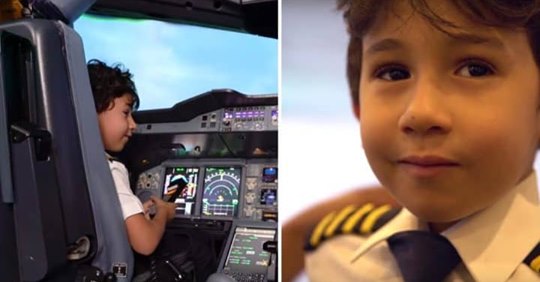 This is a story related to super-genius 6-year-old child Adam Mohammad Amer. This child has a passion for flying planes. He was born with the aim of becoming a pilot. He is a lucky guy who succeeded in his objective at a very young age without any hardships and struggles of life.

Adam Mohammad Amer is an Egyptian-Moroccan who travels hope to become a successful pilot and he is on his way. He probably knows very much about flying a plane. He surprised Etihad airways pilots with his vast knowledge of flying and the inner working of aircraft.

Seeing his passions for planes, The Etihad Airways decided to make his dream come true by allowing him co-pilot one at its training academy. A video went viral in which a 5 year and 11-month boy Adam Mohammad Amer amazed captain Samar and Copilot in the cockpit of Etihad Airways.

In this video, we are surprised to see how well he describes aircraft functions. In his videos, he is seen with the pilots of Etihad airway in a flight deck on route to Morocco. He gave a brief description of handling an airplane. He knows all about aircraft, its operating system, how to launch an aircraft and what a pilot should do during an emergency situation.

“Some planes have a Ram air turbine. It gets the emergency system back on if the engine fails. But due to the no-engine power, the landing gear doors will not come up. After that, you have to do something else to lower the flaps. You have to drop the gear by gravity alone.”

This video has warmed the hearts of thousands of social media users. Everyone was surprised to see this and many questions arose in every mind that how a first-grade student came to know all these? Does he watch any documentaries videos or he read any book regarding aircrafts or does he research for such information online?

His father spoke, “Amer would hold a kitchen mop or a paper and pretend it’s a plane flying. When he enters the toy shop, the first thing that attracts him was an airplane. He has always had a thirst for knowledge and he questions everything. We knew if we wanted to develop his character, then we should give him the space to ask and learn.”

Amer has a beautiful passion and he can become a trained pilot in future. He should continue his training the government should also help this child to achieve.