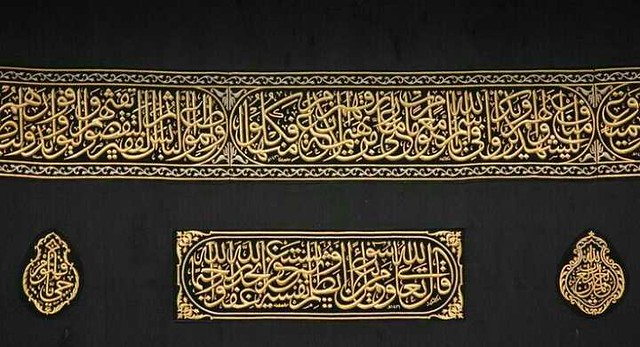 Have you ever wondered what is written on Kiswa? Which ayat is written on the cover of the Kaaba which is also called the Ghilaf e Kaaba? Today we shall address this topic.

Even though so many people who have been living in Saudi Arabia for a long time, very few know what is written on Kiswa or the ghilaf e Kaaba. Many people are aware that some ayat are written on khana Kaaba in gold; however, not many pay close attention to it.

The cover of the Holy Kaaba is called Kiswa in the Arabic language and ghilaf e Kaaba in the Urdu language. The Kiswa is changed every year on the 9th of Dhul Hijja. The Kiswa has been made by stitching together 47 strips of cloth, each strip of cloth being approximately 14 cm long and 101 cm in width. There are certain ayat written on Kiswa of the Kaaba which have been discussed detail below.

What is Written on Kiswa?

In total, there are three rows of horizontal text written on Kiswa in the Arabic Language.

The first row of the writing on Kiswa reads Ya Allah along with two of Allah’s many names Ya Hannan on the right side and Ya Mannan on the left side. \

In the second row, you can see the basic principle of Islam written on Kiswa i.e. La Illa Ha Illala Muhammad Ur Rasul Allah which means that there is no god but Allah and Muhammad (peace be upon him) is the messenger of Allah.

Even though many Muslims who might be reading this article must have visited the Holy Kaaba at least once in their lifetime, it is very unfortunate that most of them do not know about this.

These days taking a selfie at short intervals or even nonstop or checking in through Facebook has become more important during pilgrimage rather than completely and totally devoting your mind and your time to Allah.