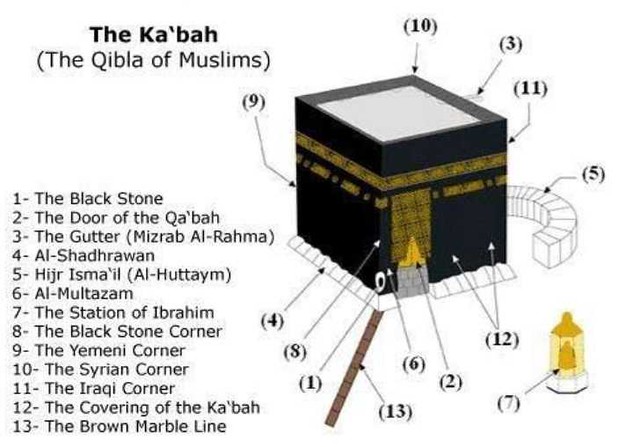 
Holy Kaaba is the Qibla of all Muslims. For Muslims across the globe, Kaaba is the most beautiful place on earth. This sacred place is located in the center of the Masjid Al-Haram in Makkah. All Muslims from all over the world come here to perform Hajj and Umrah.

Whenever Muslims pray, no matter wherever they are, they turn themselves towards the Holy Kaaba. Here is everything to know about the holiest place in the world. Each numbered detail in the following list relates to features noted in the above image.

It was fixed in one piece into the wall of the Holy Kaaba by Prophet Muhammad S.A.W, in the year 605 A.D. Since then it has been broken into a number of fragments. Now it is cemented into a silver ring frame on the side of the Holy Kaaba by sticking together 3 large pieces and numerous small fragments. Apparently, it is a fragmented dark rock of black and reddish color.

Muslim pilgrims try to kiss it as it is a Sunnah. Tawaf starting and ending point is Hajr-e-Aswad. It is the stone which was brought from Jannah.  Hajr-e-Aswad was white in color when came down from Paradise, but the sins of the world turned it black.

A golden door is at the right wall of the Holy Kaaba 7 feet above the ground which is also called the Bab-e-Tauba which means Door of Repentance. The reason the door of Kaaba is called bab e Tauba is that for thousands of years, Muslims have been asking forgiveness holding the door of Kaaba.

The staircase of the Bab e Tauba of the Holy Kaaba has wheels and it is used to enter Kaaba. It is usually stored in the mosque between the arch-shaped door of Banu Shaybah and the Zamzam well.

It is a rainwater spout between Rukn Iraqi and Rukn Shami made of gold. It is included in the sketch of the Holy Kaaba while rebuilding in 1627 because the rain in 1626 caused three of the four walls to collapse.

It is the water spout of the Holy Kaaba extended from the roof into the Hateem. In 1627, Gutter is also added to protect the foundation and base from underground water. We have covered a detailed article about Meezab-al-Rahmah.

This is known as the hateem or Hijr Ismail.  It is a holy place to ask for forgiveness. It is said in other traditions that it is the place where Adam (as) was forgiven by Allah for his sins. It is very difficult to find a place to perform 2 rakat salah here.

It is approximately a two-meter area along the wall between the Hajr Aswad and the Holy Kaaba’s entry door.  It is sometimes considered holy or desirable for pilgrims to touch Al-Multazam of the Holy Kaaba, and confess their sins here and perform dua for forgiveness. This place is of very high spiritual importance.

The station of Ibrahim is also known as maqam-e-Ibrahim located near Kaaba. It is a large stone on which Prophet Ibrahim A.S. stood while he was constructing the upper walls of the Holy Kaaba.

It is a stone sent from the heavens by Allah. It used to move up and down according to the instructions of Prophet Ibrahim A.S.  Fresh and visible footprints of Hazrat Ibrahim A.S. are an amazing miracle of this stone even after hundreds of years.

The black stone corner is the most significant corner among the four corners of the Holy Kaaba as Tawaf starts from here. It is the corner where Hajr e Aswad is affixed.

Regarding the virtue of touching this Corner, it is said that Touching the Hajr e Aswad and the Yemeni Corner is Sunnah. It is Also called as Rukn-al-Junubi. The Hajr e Aswad corner comes after it.

This is the corner that comes after the Holy Kaaba’s door before one reaches Hijr Ismail. This corner of the Holy Kaaba is named as Iraqi Corner because it faces towards Iraq southeast.

The Holy Kaaba is covered by a cloth called Kiswah. It changes every year on the 9th of Dhul Hijjah. After removing this cover, it is being cut into small pieces and gifted to the foreign Muslim dignitaries and governments.

The current cost of making the cover of the Holy Kaaba is approximately 17 million Saudi Riyals or 4.6 million US dollar. The cover is 658sq. meters long. It is made of 670 kg of pure silk. Almost 120kgs of pure gold and silver thread is used to do embroidery.

There are 99 names of Allah, Kalima and the Verses of the Holy Quran in embroidery. The Kiswah is covered around the Holy Kaaba and fixed to its corners with copper rings.

The brown Marble strip is the marking line of the beginning and end of each circumambulation.