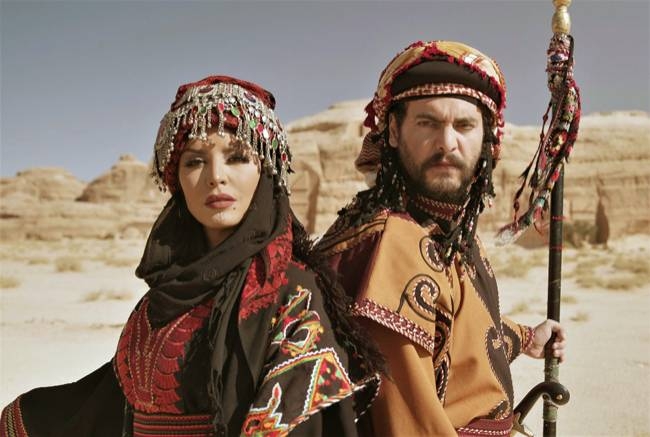 ALULA — Lebanese International Dance Theater group, Caracalla, have staged a production of Jamil Bouthayna in AlUla where the story originally played out. The three-day show that began Thursday, at Maraya Concert Hall, will bring to life the spirit and magic of the East as part of the Winter at Tantora Festival.

The production is brought to you by The Royal Commission for AlUla (RCU), which has brought a variety of regional and international acts to Maraya Concert Hall throughout the duration of the festival.

Jamil and Bouthayna is a theatrical production that tells the legendary love story of the poet Jamil Bin Ma’amar who fell madly in love with Bouthayna Bint Hayyan. The RCU assigned the Caracalla Dance Theatre the task of retelling the authentic romantic adventure inspired by an ancient love story born in the Arabian desert. The epic tale has been dubbed by many to be the Romeo and Juliet of the East.

An outstanding cast of singers, actors, and performers from all over the world are participating in this mass production of Jamil and Bouthayna under the artistic leadership of the founding maestro Abdel Halim Caracalla.

Caracalla commented: “We are delighted to partner with the Royal Commission for AlUla in its endeavor to raise the status of oriental arts and authentic Arab culture through this epic theatrical work.”

He added: “This unique story was born in AlUla and introduced one of the most remarkable tales of immortal love that took place in the heart of the desert. The Winter at Tantora Festival is the perfect platform to bring this tale back to life for the world to see.”

The story will be told through a variety of theatrical elements including poetry, musical composition, set and scenography design, video projection design, costume design, singing and choreography.

The performance will premiere in AlUla and may ultimately be presented in theaters and festivals worldwide as a message of culture, arts, and civilization from the Kingdom of Saudi Arabia to the world.

As it celebrates its 52nd anniversary, the Caracalla Dance Theater group has evolved to become the most prominent dance theater in the Middle East.

In the arms of the picturesque nature of AlUla, the theater production will take place at Maraya Concert Hall, the largest theater constructed with mirrors in the world. It represents a modern architectural masterpiece and can accommodate about 500 guests and provides a high-quality sound system. The festival also houses many other diverse activities including the local markets, winter garden, farms, and the old town.

Over the course of 12 weeks, the festival will present a variety of activities that merge Eastern and Western culture, embodying AlUla’s heritage as a meeting point for different civilizations from around the world throughout history.

Winter at Tantora Festival offers a wide range of diverse experiences that cater to all tastes from all walks of life. The festival will take place every weekend starting Dec. 19, 2019, and running until the March 7, 2020.

Guests this year will have the unique opportunity to visit the historical heritage sites before they are closed to the general public until October 2020. They will also be able to attend musical and artistic performances by some of the most respected artists in the Arab and international world. — SG