Sign in
Welcome! Log into your account
Forgot your password? Get help
Password recovery
Recover your password
A password will be e-mailed to you.
Life Of Arabs A complete guide for those who are living in Middle East or planning to come soon.
Advertisement
Home Saudi Arabia Accident & Traffic Violations Controversies lead a husband to deliberately run over his wife on a... 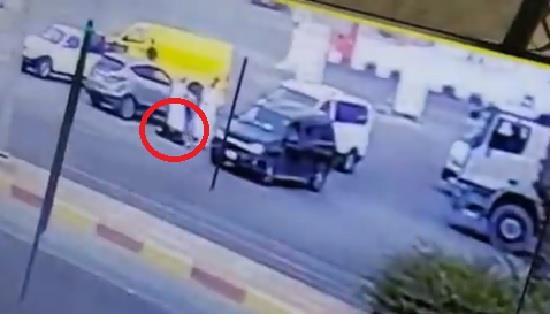 
A surveillance camera observed in a street in the city of Khamis Mushait, a terrible accident for a man who deliberately ran over his wife while she was walking on the road.

A video circulating on the social media of the accident showed that the car was a “jeep”, whose driver stood by the side of the road to talk to his wife, and then he rushed forward, returning to reflect on her direction and deliberately shocking her.

The video also showed the husband getting out of the car towards his wife while she was laying on the ground after she lost consciousness, amid the crowd at the site around her.

Sources indicated that the incident took place months ago due to differences between them, and the wife suffered injuries, as a result of which she was hospitalized, and the husband was later arrested, who is still arrested.