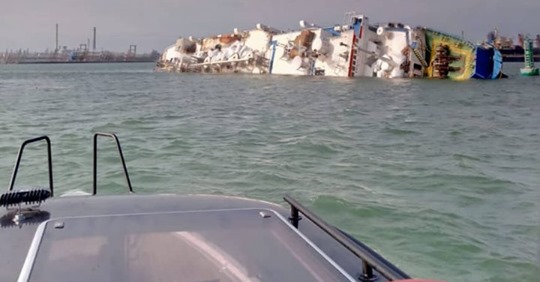 A Saudi-bound ship capsized on the Romania port along with 14,600 sheep loaded in it. Queen Hind bound for Saudi Arabia capsized in the Black Sea off the coast of Romania soon after leaving Romania Midia port. The reason for its overturned has yet not disclosed and is still unknown.

All the humans on the sheep were rescued

Initially, the crew members including 20 Syrians and one Lebanese that were present in the ship were rescued along with 254 sheep, two of them were pulled out of the water.

AFP is hoping that the sheep present in the ship are still alive and will be recovered soon as the rescue operation is ongoing. Rescuers are supported by the military, police, and divers. They are trying to pull the Palau-flagged ship to the port.

On the other side Romania’s main livestock breeder and exporter association, Acebop called for an urgent investigation soon after the disaster. The Acebop president Mary Pana said that their association was shocked by the disaster. Moreover, she also said that we should outright ban the livestock if we could not protect them during long-distance transports.

The ship had been overloaded

Furthermore, Gabriel Paun of NGO Animals International alleged that the ship had been overloaded and also that Queen Hind, the Saudi bound Ship was having engine problems since last December. He also urged to AFP that the investigation on the incident should be immediately opened.

Romania joined the EU in 2007 is the third-largest sheep breeder and a top exporter of livestock mainly to the Middle Eastern countries. On the other side, the objectors have also criticized and labeled nearly 100 of livestock vessels as ‘Death ships’ that leave Midia port every year.

They say that the sheep are being cooked alive on the board under the open sun in hot summers. The authorities should investigate the root cause analysis and take the required action.