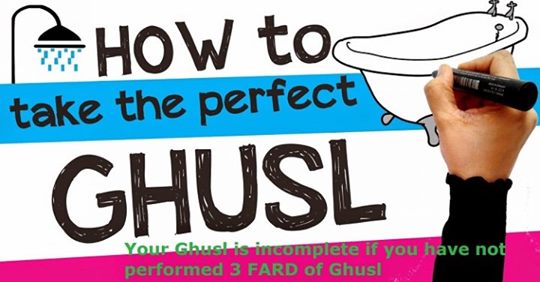 Some days ago, I met with an old person in a masjid. While talking about different things, we started talking about the ghusl procedure in Islam. I was astonished to know that the old man was not even aware of how to perform Ghusl as per Islam.

He did not know about the 3 mandatory steps or Fard of performing ghusl, in other words, he was not performing proper Ghusl from last 60 years. I thought to educate other Muslims about it so that they can perform ghusl correctly.

Muslim men and women perform the act of Ghusl which is an Arabic word meaning of purifying oneself. It is an important act to perform for purifying oneself after sexual intercourse or sexual act, after losing consciousness or after menstruation to be pure. It is also performed after giving birth or death.

There is a specific ghusl procedure to clean and wash the body from impurities which are discussed below. It is also important to mention here that the cleanliness of the body is one of the 7 Fard pre-requisites of Salah.

When do you need to perform Fard Ghusl?

It is good to perform Ghusl before Eid prayers, before Friday prayers, after washing a corpse, after conversion of a disbeliever to Islam and before the pilgrimage to Makkah. However, after the following 3 situations, it is mandatory or Fard to perform Ghusl.

What is the Fard of ghusl in Islam?

There are 3 fard parts of Ghusl. If we miss any of these parts, our Ghusl is not valid.

How to perform Ghusl in Islam?

Although there is not a mandatory ghusl procedure to follow in Islam as in order to perform ghusl correctly, you just need to fulfill the 3 above mentioned obligatory required or fard of performing Ghusl. However, we have narrated a Sunnah way of performing ghusl in Islam.

–After positioning yourself facing the water, wash your hands, the right one. This includes your wrist and fingers till the arm. Repeat it three times. Do the same with your left hand now.

–Using water, wash your private parts three times and remove all the impurities by rubbing your body parts.

–Cupping your right hand, fill water and take it in your mouth. Swirl it inside and then spit it. Repeat it three times as well.

–Take water inside through nostrils using right hand. Blow it out on your left hand and repeat it three times.

–Wash your face three times. You should wash it from hairline till chin extending to both the ears. Men should wash their beard as well.

–Now wash your arms, first the right and then the left from above the elbow three times.

–Now pour water three times on your head such that your hair gets wet till the roots and scalp.

–Pour water on your right side of the body including the shoulders and repeat it on the left. Now pour it over the head wetting your whole body and rubbing it with hands.

–Move to a clean platform and wash your legs right and then left till the ankles and between the toes including the sole three times.

–Dry your body with a clean towel. You are now clean and eligible for prayers.

Full moon to align directly above Kaaba in Mecca on Jan. 28

Saudi Arabia fires imams for failing to warn against Brotherhood

Pilgrims will soon travel from Makkah to Madinah on camel backs