Sign in
Welcome! Log into your account
Forgot your password? Get help
Password recovery
Recover your password
A password will be e-mailed to you.
Life Of Arabs A complete guide for those who are living in Middle East or planning to come soon.
Advertisement
Home Saudi Arabia General Information Saudi man throws shoe at a woman for not covering her face 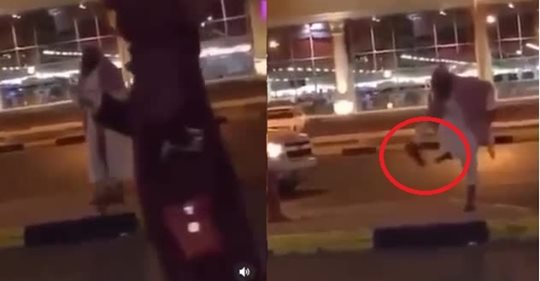 What more can you expect from a conservative man? He would rather stop you from going out or make you follow his strict rules. Here something peculiar happened. A Saudi man removed his shoes and throbbed it over a woman who appeared with her face uncovered in public.

The incident was reported in a video that went viral. The video which was made outside a Shopping mall in the Saudi Province of Yanbu showed a Saudi man with a long beard standing in a street abusing the women for appearing with their face uncovered in the public.

He is seen calling the woman an “adulteress”. In the same video, he removed his shoes and threw it at one woman who appeared in the street with her face uncovered.

However, the incident soon went viral and authorities came forward to take strict action against the man. Police identified the culprit and arrested him. He is now referred to the prosecution for illegally throwing shoes at an unknown woman.

Saudi Arabia had taken several steps to boost women’s rights as a part of widespread changes to shed ultra-conservativeness of the people. Women have been granted several rights from driving to traveling abroad without their male guardian.

We can only hope for the betterment that soon the conservativeness will be wiped out from the Kingdom and women will be granted their rights without any hurdles.