Sign in
Welcome! Log into your account
Forgot your password? Get help
Password recovery
Recover your password
A password will be e-mailed to you.
Life Of Arabs A complete guide for those who are living in Middle East or planning to come soon.
Advertisement
Home Saudi Arabia Jawazat And MOI No more expat doctors in the govt hospitals – MOH 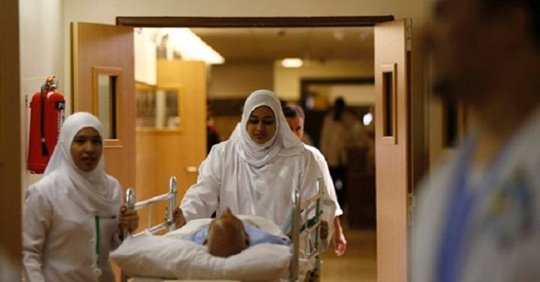 No more hiring of expat doctors in Government Hospitals

On Tuesday, there was a meeting between the Ministry of Labor and Social Development and the Ministry of Health, in which it was resolved to stop hiring of foreign doctors to provide employment to Saudis. The announcement was made during a joint workshop in Riyadh to appreciate the employment of Saudi dentists.

Dr. Ayed Al-Harthy, director-general of human resources at the ministry of labor, has sent a circular in this respect to all directorates of health affairs to stop hiring foreign doctors in various provinces and governorates across the Kingdom.

Currently, there are 28,500 foreign doctors working and providing services to Saudi Arabia. This directive follows the decision to stop hiring foreign dentists to provide job opportunities for Saudis.

According to an online report, 4,000 Saudi dentists are unemployed and unable to find jobs. There are 26 dental colleges in the Saudi Kingdom and 3000 recent graduates from these universities and 1000 of which are already done with it but not working anywhere.

The official dentists registered in 2015 were 10,150 of which 5,946 were local Saudis. According to the experts, jobs are available but companies are hiring foreigners usually.

He also said that there are many dentists who are graduated and are doing jobs which are not even related to their studies such as working at restaurants, bakeries and in unrelated government positions to earn something.

They should register a protest with the Health and Labor Ministries. Many dentists criticized that a local Saudi dentist is paid only SR 4,000 monthly which is just 20% of a foreigner’s salary.

A dentist or dental surgeon is a person who concentrates on dentistry subjects related to teeth and oral cavity. It is the diagnosis, prevention, and handling of the diseases and conditions of the oral cavity.

Both Ministries also discussed the methods as to how they should implement their decisions and how to provide training to the Saudis. Many hospitals do not have the necessary number of dentists.

These opportunities should be provided to citizens rather than foreigners, as said by Asim Arab, chairman of the national committee for consultancies at the Council of Chambers of Commerce.

They also said that citizens are hired as receptionists and security workers by the health facilities and for a dentist, a foreigner is hired. The ratio of Saudi doctors is one Saudi among 2 foreigner doctors.