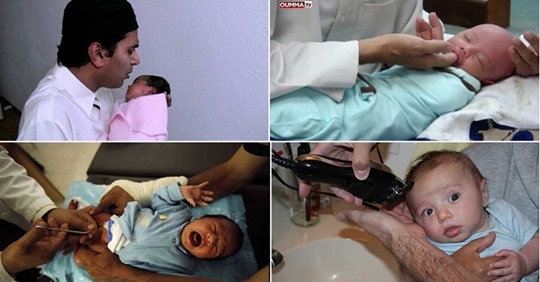 The birth of a child is a moment of rejoicing for all the family. The family waits patiently for the little one. The new addition in the family is a source of happiness for the family. However, during those memorable moments, we as Muslims shall be aware of Sunnah after childbirth.

There are certain actions that we must undertake when we are blessed with a little one.  When a child is born to a Muslim family, the family shall follow some Sunnah after childbirth.

Every child is a blessing of Allah Almighty. We shall remember to thank Allah for bestowing His blessing upon us. Either be a girl or a boy, we should remain contented and shall remain humble.

We should not think that it would have been better if we had been blessed with a boy/girl instead. In many family’s baby boys are valued more than baby girls and thereby on the birth of a girl, most families feel shame and not thank Allah.

The Hanafi school of thought believes that reciting Adhan in the ears of the child is a good act however it is neither obligatory nor sunnah. The rest of the schools believe it to be Sunnah (on basis of hadith found in al-Tirmidhi, Abu Dawud, Ahmad, al-Bayhaqi).

According to hadith narrated in Bukhari and Muslim, when a newborn was brought to the Prophet PBUH, he performed Tahneek.

Accordingly, he softens a piece of date in his mouth and gave it to the newborn. This act is considered sunnah, which done is better but remain undone is not harmful.

It is one of the Rights of Newly Born that he/she must be given a good name. A name that has a good meaning and that would reflect a Muslim characteristic. Also, it is better to give a name that belongs to Prophets, Sahabah, and pious Muslims.

All Muslim boys undergo circumcision when they are quite young. It is advisable to follow this sunnah for kids as soon as possible as when the child grows he would feel more pain.

Most of the people believe that it shall be done within 7 days of birth. There are many health benefits of circumcision.

The Hanafi school believes that shaving off the head for a Muslim child is not obligatory, yet the other schools believe that it is a sunnah. The head of a newborn (be girl or boy) is shaved off on the seventh day or within a week.

As an act of gratitude, an animal is sacrificed and distributed (raw or cooked) among the poor for the newborn. This act is also done mostly on the seventh day.