Sign in
Welcome! Log into your account
Forgot your password? Get help
Password recovery
Recover your password
A password will be e-mailed to you.
Life Of Arabs A complete guide for those who are living in Middle East or planning to come soon.
Advertisement
Home Saudi Arabia Royal Coverage Saudi Prince arrested for threatening with a Machine Gun in Public 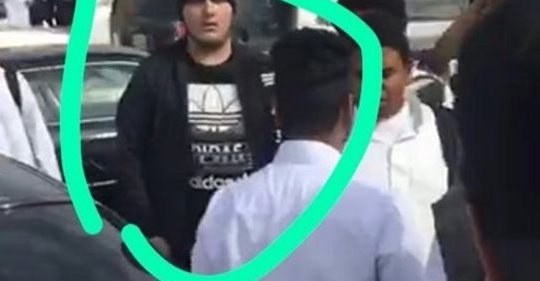 
A Saudi Prince Mashhoor bin Talal bin Saud was arrested with four others for fighting in the street. It was reported that Prince Mashhoor allegedly threatened civilians with a gun.

He was arrested because his video which was made by some civilians during the fight became viral on social media. That video stood as a crime in the Kingdom. Soon as this video became viral many of the Saudi citizens reacted to it with anger and called the authorities to take action against those who are involved in this fight and threatened the people.

Saudi Gazette has reported that five people were arrested including Prince Mashhoor. Four are Saudi citizen and one is Sudani among the arrested people. They were fighting in front of a school in Northern Riyadh.

During the fight, the prince companions waved a gun at several people and later left in a car that had no number plate. General Fawaz Al Meman (spokesman of Riyadh region police) said, “Riyadh police officers were successfully able to identify those involved.

They include 4 Saudis and a Sudanese expat. They have all been arrested and authorities have now seized the weapon used in the fight”. He said that the fight was due to some previous differences between the two groups involved in a fight.

He further said that the Attorney General’s Riyadh region office has been informed about this incident. Authorities are still investigating and are continuing to detain anyone connected with this case.

Now the Saudi citizens are happy and relaxed hearing the news the all who were involved in the fight were arrested. They were thankful to King Salman that it was his pleasure who ordered to immediate arrest. They were also thankful to the authorities and all those who called to take action against this illegal act.

People were happy with the order of King Salman and said he will not let any criminal to break the law and threaten the safety of the people of Kingdom. People are eagerly waiting for the Order of punishing these five arrested from King Mohammad bin Salman.

Justice was served and laws were obeyed in this case too, which is a very good sign. Despite the fact that a prince was involved in this case, justice has prevailed, and he is arrested. We often see VIP culture in almost every country where the powerful ones are above the law, but this is an example for them too.