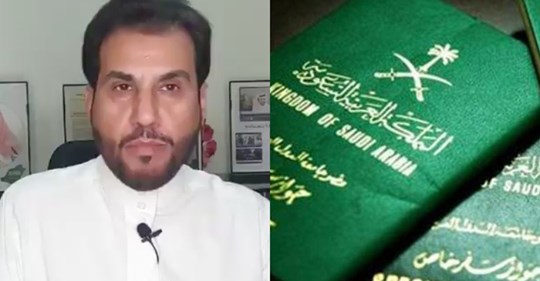 Saudi Arabian Ministry of Interior has recently withdrawn the nationality of a journalist Abdul Hameed Al Ghabin because he publicly supports Israel and advocates his relations with Israel. Abdul Hameed is a writer as well as political analyst who has written for famous and well-known Saudi Newspapers like, Al Jazeera, Okaz and Al-Riyadh newspaper.

The writer and journalist are famous in the Kingdom for possessing pro-Israeli views because his writings, as well as Social media Posts, are encrypted in praising Israel. In November, he also praised Israeli Prime Minister Benjamin Netanyahu saying that he deserves to be honored with the greatest of leaders.

The news of his withdrawn nationality was also confirmed by Abdul Hameed al-Ghabin on Twitter where he also mentioned that he is unsure about the reason behind this and he was not officially informed about this decision. He also said in a statement that he respects the decision issued by the Ministry and can do nothing except listening and abiding the decision.

On the other side, it is also reported that Al-Ghabin is also highly praised by Israeli groups. His pro-Israeli videos on social media accounts are also shared by official Israeli’s social media accounts. He has also published articles in Israeli publications and has also called for building relationships with Israel.

Al Ghabin in one of his recent video clearly showed his support for Israel claiming that Israel is a peaceful state that only seeks peace. In the same video, he also repeatedly expressed his encouragement of the collaboration between Saudi Arabia and Israel and also talked about the political, economic and military ties between these two states.

Above all Al Ghabin also continued to express his support for Saudi leadership despite the decision of canceling his citizenship. Posting a picture of Saudi King Salman Bin Abdul Aziz and Crown Prince Mohammad bin Salman showing great leadership represent justice and security he supported the Saudi leadership

The Government of Saudi Arabia repeatedly called for the recognition of the Palestinian state that was built on their land and Israel captured it during the war. In April 2018 Prince Mohammad bin Salman said that Israeli’s were entitled to live on their own land peacefully.

Egypt: New procedures for flights to Saudi Arabia, allowing children under 18 who are not immunized to travel

Oman ends the Travel ban from Red-list countries including India, Pakistan and Bangladesh

Jawazat clarifies required important points of Passport at the time of...

LifeOfArabs - September 21, 2021 0
Jawazat in Saudi Arabia clarified that the passport is the only document that authorizes its owner to travel outside the Kingdom through any Saudi...

No need of Permit to perform Prayer in Prophet’s Mosque –...

A march by the Royal Guard, fireworks, air and sea shows.....

“Human Resources” is studying the localization of additional qualitative professions

Schedule of Air Shows in various cities on the occasion of...

A march by the Royal Guard, fireworks, air and sea shows.....