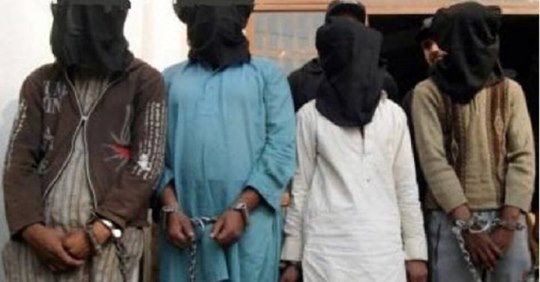 4 Pakistanis were executed for the rape of a woman

The ministry of Interior executed four Pakistani men on this Thursday. It was reported that the four men were found guilty of rape, theft and murder case.

We all know that Saudi Arabia implements strict rules and Laws and they always stood first in applying strict punishments to the criminals. No matter whoever it is, Saudi Laws are equal for all its citizens as well as for all expats. Nobody will be spared if he or she found involved in any crime.

They entered the house with an intention of robbery

According to Saudi press agency,  it was reported that the four Pakistani men named Liaqat Hussain Ishaq Hussain, Sajid Ali Asqar Ali, Mohammed Thaqib Mohammed Al-Warth Ali and Faisal Mounir Munir Hussain entered a house on the third floor of the building in Riyadh, with the intention to rob the house.

After entering the house the men tied up the son and raped and killed the woman on the spot. Two of the men were also found involved in raping the woman’s son. Later they stole the jewelry and money from the home.

All 4 were arrested and prosecuted

After the investigation, the men were accused and sent to the Criminal court on trial. They were found guilty of their crime and the court issued the death sentence.

The death sentence decision was later sustained by rulings in the Court of Appeal and the Supreme Court leading to a royal order. After the Royal order for execution was given, the execution was carried out this Thursday.

The Ministry of the Interior later said that it supports the willingness of the Government of the Custodian of the Two Holy Mosques to maintain security, attain justice and implement the provisions of God. These type of punishments should be applied to the criminals so that in future nobody ever try to commit such crimes.

It is not the first time for Pakistanis

It is not the first time Pakistanis are involved in criminal activities in Saudi Arabia. A few days ago Saudi media reported that 6 Pakistani arrested for robbery at Gold shops worth SR 10.6 million. The culprits who are involved in such kind of activities should be punished severely.

During the year 2013, the Saudi government executed at least 12 Pakistanis for being involved in drug smuggling, murders, and rapes in Saudi Arabia.

Don’t play with the country providing you everything

We need to understand a fact that when a country is providing you an opportunity to work, use their resources and build your career and future of your children, you should respect the rules and regulations of the country.

Considering the efficiency of the Saudi police, I don’t think one should even think to be involved in any criminal activity. They can trace you with your fingerprints, your blood drops and even with your DNA. It is better to be clean if you want to be safe.