Sign in
Welcome! Log into your account
Forgot your password? Get help
Password recovery
Recover your password
A password will be e-mailed to you.
Life Of Arabs A complete guide for those who are living in Middle East or planning to come soon.
Advertisement
Home Saudi Arabia General Information Saudi refused SR 15 million to sell a 1400 years old stone 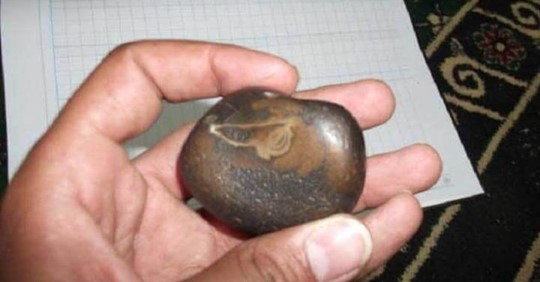 
How is it sacred? Saleh Musfer Al Gamdi claims that he has found the Sejil stone. The stone with which Allah sent a flock of birds (Ababeel) to throw at the army of the warlord of Yemen, Abraha.

The young man found the stone while he was on a hunting trip in the mountains near the Yemen border. You can read the complete story of how did Allah send a flock of Ababeel to protect Masjid al-Haram.

Gamdi says that he found the stone in the Green Wadi, now known as the Jarb valley, the place where Abraha along with his forces decided to rest before continuing towards the Holy Kaaba.

Who was Abraha? Abraha was the King of Yemen before the advent of Islam. Arabs used to visit the Holy Kaaba in Makkah every year to perform the pilgrimage. Abraha was jealous of the fact that the people visit Kaaba whereas he was one of the strongest and most powerful rulers in all of Arab.

He built his own temple and wanted the people to perform their pilgrimage in Yemen from then onwards.  The Arabs denied his offer and continued about their own ways but they knew that Abraha had a huge army which consisted of war elephants.

Abraha had warned them that if they do not accept his ways then he would destroy the Holy Kaaba and he set out to do that.

Abraha’s elephants stopped in the mountains and sat down. Then came the birds from above who threw stones at Abraha’s army, the elephants became scared and out of control, killing their own people.

This year was marked as the year of the elephant and also the same year in which Prophet Muhammad (PBUH) was born. Allah showed the people that misuse of power would get them nowhere. Today the Kaaba is the holiest shrine for the Muslims.

$4 million for the Stone: It is due to the significance of this event that Gamdi was offered a price of $4 million (SR 15 million) for the stone but he refused to sell it. Experts say that the stone date back to nearly 1,442 years.

Gamdi got the offer and information from archaeologist team through his friend. The tourism department in Baha asked Gamdi to hand over the stone but he refused to that as well. He says that he had found the stone after he had dreamt about his father and grandfather. He has no intentions to give it up just yet.

Is it really that stone: Well, you can raise many questions on it. How come a bird carries a 131 gram stone in its mouth? But if you read the complete story of how did Allah send a flock of Ababeel to protect Masjid al-Haram, it is a miracle.

If you believe that small stones can destroy the army of elephants, it is also possible that Ababeel carries 131 grams of heavy stones.