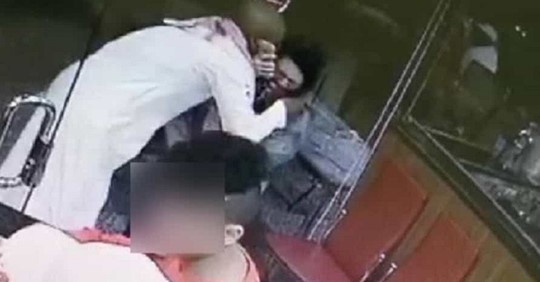 Women around the world face the issue of sexual harassment. This is the most unfortunate fact that we are facing. The reason behind is that women are not given enough protection by their states. Saudi Arabia is also unfortunately exposed to this vice.

The women in Saudi Arabia are also made a victim of sexual harassment but the number of cases reported is very low due to strict punishment against the offenders. Last week, a woman was forcibly kissed at a Local restaurant in Riyadh.

Yes, the man who has been identified as a Saudi national was caught kissing a woman against her will. The man, according to Chaker bin Suleiman Al Tuwaijiri, who is the official spokesman for the city’s police, is a Saudi in his mid-thirties.

The CCTV footage of the incident is out and it can be seen that the victim was standing in a queue for her order when this man comes and attacks her. In the terrible incident, the woman is forcibly kissed while she is grabbed by the attacker.

The video was soon circulating in Social Media and people shared it with different reactions. While there were some who blamed the woman for the entire incident, there were many who were sensible.

Some people said that the incident occurred because of a woman as she had worn makeup and wasn’t wearing the Hijab. Moreover, some pointed out pathetically that it was all the result of female exposure and, immodesty and mixed-gathering.

While there were many who back-flashed at the man saying that this is the most inappropriate excuse. The people asked the authorities to arrest the man and punish him.

A Saudi man was arrested within no time

Soon the vigilant Saudi Authorities were able to track down the man and gave forth the delighted news that the man was with the police. Women around Saudi Arabia are celebrating the arrest of the culprit. They took it to social media saying that there is a difference between animals and humans.

Some people pointed out that the worst feeling coming is the fact that the man is a male guardian to some women out there. He must be punished so that others might learn. This is not a joke; sexual harassment is not something that is to be taken lightly or made fun of.

People, experts, and activists are hopeful with the law and say that it will be successful only when the victims come forth and report a case.