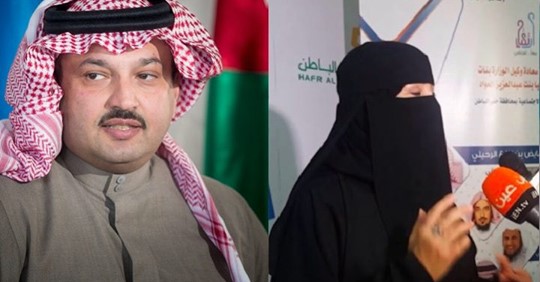 A video was circulating on social media that showed a girl from Al Barak Governorate raised her voice and asked the prince of the region to pay attention to the suffering of stammering people.

The girl who is disclosed as Ayesha bin Miqrawi is a computer science professor at Al Khalid University. She was explaining the suffering of the people who stammer during a meeting with the Governor.

During her speech, she was surprised that Turki bin Talal announced that she was appointed in the region Emirate in the women section so that she could speak throughout the year and represent the views of the suffering people.

Indeed, it was a surprising selection and on the other side, the girl too was amazed to hear the Prince’s decision to appoint her immediately.  Now she is appointed as a civil servant and soon she is going to start her new job.

The Prince stated that the girl proposed the establishment of an electronic clinic through an application for some type of stutter.

She has already created an application for stammering people

She created the app that is helpful in saving stutters. This app allows them to attend a virtual clinic to overcome stuttering because she too suffers from the same issue and was looking to present a scientific solution.

The girl is getting ready for her new job that is set to start this Sunday. She claimed that this was the result of her years of hard work, her patience and her firm belief in God’s help. She assured that she will become the voice of stutters that will be heard everywhere in the Kingdom.

This kind of initiative could be a great help for other differently-abled people in Saudi Arabia. It will create opportunities for them to excel in their lives.