Sign in
Welcome! Log into your account
Forgot your password? Get help
Password recovery
Recover your password
A password will be e-mailed to you.
Life Of Arabs A complete guide for those who are living in Middle East or planning to come soon.
Advertisement
Home Saudi Arabia General Information Top 8 Coldest Cities to visit in Saudi Arabia during Winter 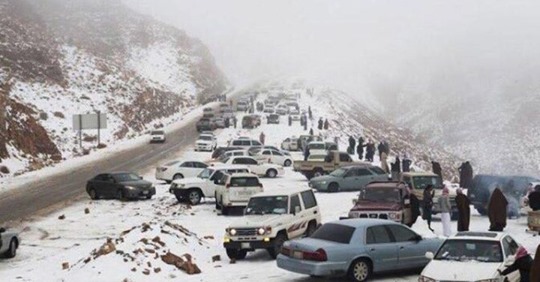 
Saudi Arabia is classified as a desert country. A desert is a hot and dry place. No one can enjoy winters in deserts as the temperature is strikingly high. Yet there are actually 8 cities in Saudi Arabia that are really cold in winter.

The temperature can fall below zero degrees Celsius as well! So brace yourselves up to learn about these 8 interesting cities. And if you feel like enjoying winters in the kingdom of Saudi Arabia, tick mark tours there for upcoming winters. Recommended: 5 Places in Saudi Arabia where it snows in the Winter

Turaif is located at the northern borders of Saudi Arabia. It is the country’s coolest city as it holds the record of experiencing the lowest temperature ever in the kingdom! It has observed a temperature of -12 degrees Celsius which makes the coldest city of the Arabian Peninsula.

Saudi Arabia exhibits great geography. Its southern parts are hot as they mainly comprise of mountains. However, the northern parts of the country exhibit extreme cold temperature in winters.

Sakaka is another northern city of the kingdom, where winters are really harsh. Temperature can fall to zero degrees Celsius here.

Abha is another great city in Saudi Arabia. It is carved in the middle of the Sarawat Mountains. It exhibits high altitude: in fact, it one of the highest inhabited cities of the Kingdom.

It has an elevation of 2,270 m. The city of Abha is not the coldest place in Saudi Arabia: many people have a wrong belief: Yet it the city with the most pleasant weather around Saudi Arabia.

Rafha is the city that has actually experienced some heavy snowfalls. So why move abroad to witness snow when you have snowfall in KSA? The city sits close to the border of Iraq.

The capital of the Kingdom of Saudi Arabia, Riyadh has been able to grab chilly winters for past few years. The nights become really cold in Riyadh. The temperature falls to zero degrees Celsius for 1 or 2 nights as well.

The previous year’s winters in Riyadh were unfortunately not that cold. Maybe we can attribute this to global warming.

Snowfall lovers have to visit Tabuk in winter. Whenever the news strikes with headlines of snowfall in the kingdom: Tabuk is the place that comes to the mind. A thin layer of snow covers the sand here. The temperature has been recorded to fall as low as -4 degrees Celsius.

The city of Arar got its foundations in 1951. It lies in the middle of the huge plain yet rocky limestone. It has the weather everyone would love to experience: a cool moderate one. The temperature here does not fall to zero degree yet snowfall hits here very modestly.

Hail is an elevated city. It lies at an elevation of 950 meters. This elevation allows it to exhibit pleasant weather around the year. Hail is an agricultural city where the temperature can fall to -10 degrees Celsius.