Sign in
Welcome! Log into your account
Forgot your password? Get help
Password recovery
Recover your password
A password will be e-mailed to you.
Life Of Arabs A complete guide for those who are living in Middle East or planning to come soon.
Advertisement
Home Middle East Iran Irani Husband ties wife to the car’s bonnet and drives it 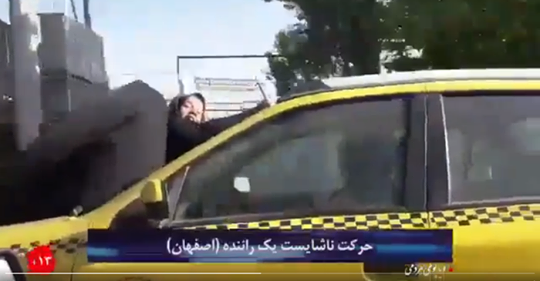 Husband and wife live together and share life, food, and shelter. In such a scenario, they can have arguments and fights. Having arguments and disagreements is part of every relationship: you can have (and everyone certainly does) a disagreement with your parents, siblings, aunt and even with your best friend.

This is something natural and common. Two people are different and have different opinions. But what is the most suitable way out if a husband and wife have a disagreement? You can talk about it, convince them or get convinced. If the other person is wrong, you can punish them lightly.

For instance, stop talking to them for a while until they realize their mistake. But this is not how most couples tend to get along. If we talk about this Iranian couple, they certainly don’t know how to get out of a disagreement. So there was this couple in Iran who got into a disagreement.

The angry husband, who by profession is a taxi driver, thought of this unique punishment. He tied his wife to the bonnet of the Taxi and drove it! Yes, you read that right. This is a true incident. The footage of the incident went viral on social media when a nearby person on the motorcycle filmed it.

The people on social media could not believe their eyes! A man tied his wife to bonnet as a punishment!  The people called for immediate action and asked for harsh punishment for the man. They commented that this is no way husbands ought to treat their wives.

Anyone can commit a mistake, but this is certainly not the way to teach them that they are wrong. Men need to understand that their being physically powerful does not mean that they can do anything with a woman. According to a government official, the video belongs to the region of Isfahan located in Iran.

In the video, one can clearly hear the wife pleading his husband to stop and forgive her. It is also reported that the wife fell off the bonnet while the vehicle was being driven and got seriously injured. The officials state that the wife was taken to the nearby hospital while the husband got arrested.

We hope that the wife gets recovered soon and we hope that the man is taught a lesson for good! This is no way to treat your wife. You cannot even treat slaves like that, how can people behave so inhumanly? We need to teach the well-forgotten morals, ethics, and values to the people!

The Otr Elkalam competition attracts attention to Saudi Arabia around the world.

Update Fire suppression continues He grew up at Aramco 50 teams fighting the flames.