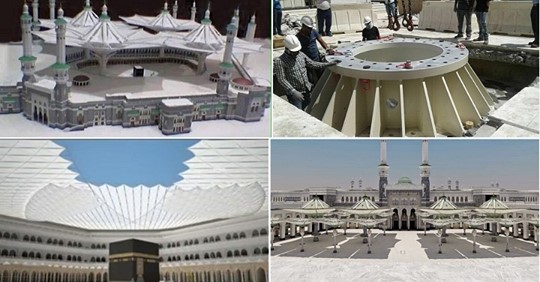 World’s largest foldable umbrella is going to be installed very soon in the Grand Mosque of Makkah in the northern courtyard of the Mosque. The work for this purpose has already started.

This project is supervised by “The General Presidency for the Affairs of the Two Holy Mosques” and they do the supervision with the cooperation of specialists from the Education Ministry and the company who has contracted for this project to implement the largest expansion at the holiest site in Islam.

King Abdullah ordered the Umbrellas to be installed

The late King Abdullah, in the month of December in the year 2014, ordered that umbrellas shall be installed in surrounding courtyards of the Grand Mosque.

Head of the above-mentioned presidency, Sheikh Abd al Rahman Al Sudais, announced these orders from the King. He told that shading will be provided to the external plazas and it will be in addition to the areas that have already been approved in the expansion done by King Abdullah.

A team has come from Germany for the supervision of the installation process and electronically controlled operating mechanism of the umbrella.  This team includes 25 engineers, a number of specialist technicians and a number of safety experts.

Facts about the World’s Largest Umbrella in Makkah

A total of 8 umbrellas of size is going to be installed in the Grand Mosque, these are of a giant size and are equipped with high technology. Along with these eight, 54 umbrellas, comparatively smaller in size, will also be mounted in the area of the northern courtyard. These umbrellas together will cover an area of 19,200 square meters.

The project to install Umbrellas will start at the beginning of 2020. The roof of the Masjid al-Haram will also have these umbrellas. Each of its canopies will have a giant clock to inform about time. A number of screens will be attached to provide guidelines to worshippers

Air conditioners will be attached to control the high temperatures and for security purposes, surveillance cameras are also attached.

This project includes installation of 122 benches so that the people who come to worship here can also take rest if needed and service buildings will also be built here.

When this project will be completed, the whole area of the northern plaza that starts from King Fahd Expansion and ends at King Abdullah Expansion will have canopies in it and the shaded area will then accommodate a total of 400,000 worshippers approximately.

Almost 250 umbrellas similar to these have already been installed at the plazas around the Holy Masjid Al Nabawi in Madinah.

These umbrellas are programmed in such a way that they fold and unfold like blooming flowers. This sequence of the fold and unfold has a delay of a minute so that the moving parts of umbrellas do not collide with each other.

This operation of the fold and unfold is done at different timings according to the changes in daily temperature.

The Masjid Nabawi umbrella opening time in the summer is in the morning and they create a semi-transparent ceiling and this “nearly silent” process is completed in the duration of fewer than three minutes.

In summer seasons, these umbrellas are opened to provide shade in the day times to reflect the radiant energy of the sun. The Masjid Nabawi umbrella closing time is around 20 minutes before sunset.

When the temperature is relatively low in the winter, the umbrellas are kept closed during day times. By the closure in the daytime, sun in winter is allowed to keep the site warm and umbrellas are opened in the night to protect the masjid from due drops.