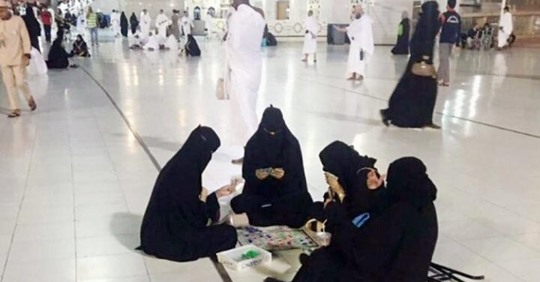 A very peculiar incident was reported from Makkah. Four fully covered women have been spotted playing cards inside the boundaries of the Grand Holy Mosque of Makkah.

What made them play a board game there when millions of Muslims visit there just to seek mercy and blessings of Allah?  People sitting inside the mosque love to pray and recite the Holy Quran rather than wasting time in some other activities.

On the other hand, these four women whose nationality is unknown found a way to recreate themselves and kill the time by playing a board game. It totally sounds weird.

People from around the world spend millions of dollars just to visit the Holy Mosque and satisfy their soul by praying there and offering other religious activities, but these four women were engaged in wasting their precious.

The pictures of girls went viral on social media

Pictures of these women soon went viral on social media which showed four women sitting cross-legged and were busy playing board games without hesitating and caring about the people and the surroundings. This picture caused an array of comments on social media.

It was reported that the four women were spotted at around 11 pm on Friday. The pictures too show that these were taken during night time. The four ladies were at the western Square near the King Abdul Aziz Gate.

After the women were spotted the operation room was alerted and the women section at General Presidency was asked to deal with the situation.

The action was taken by the authorities

The lady’s supervisors went near the playing women and requested them to respect the sanctity of the mosque and stop their game.

The women soon reacted and obeyed the order and without arguing and creating any disturbance they quietly stopped their game and left the place.

No doubt to say that there are some people too who use such type of incidents to question and doubt the professional commitment of the staff.

The picture of these women causes a debate on social media and most people just condemned the attitude of the four women by saying that they disrespected the sanctity of the mosque, as a Muslim they should respect the religious and spiritual significance of the mosque.

Many people involved in unusual activities in the mosques are often reported. If we remember an incident that occurred earlier in 2015 some four young boys were arrested by the security authorities when they were found playing cards inside the Holy Mosque in Madinah.