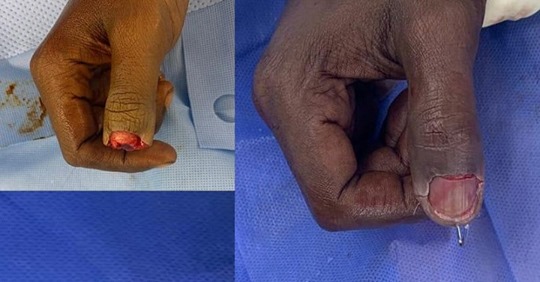 A 30 years old worker was rushed to the Suleman Al Habib Hospital of Al Khobar. He got his thumb completely cut off during a work injury.

According to Dr. Hillel Al Harbi, who is the medical director of the hospital, the patient arrived at the hospital two hours after the accident. He was then rushed to the emergency and was given first aid and necessary medicines.

His amputated thumb was kept safe

His cut off thumb was also under medical surveillance: it was kept in a jar of water and ice to allow the cells to remain alive and accelerate healing.

God forbids if something like this happens to anyone, he should keep his calm and make every effort to keep the amputated part safe. It is better if you can keep it in the ice to keep it safe. Keep in mind that doctors cannot implant a body part after more than a few hours.

It was a complex implantation

The medical director added that the medical team consisting of a plastic surgeon, specialists, and anesthetists were immediately called. The pre-operation requirements such as tests and x-rays were conducted and tools such as electron microscope were arranged.

The implantation was a complex one as the doctors had to search for the nerves and blood vessels so that the blood flow would be normal.

The vein is less than a millimeter thick and reconnecting becomes complex. The bones were re-fixed, and the last stage was to ensure that the nail bed was repaired.

The operation continued for 4 hours

The implantation of the amputated thumb took 4 hours. The surgery went successful and the patient was kept at the hypnosis room for observation of blood flow in the thumb. After recovery and observation, the patient was discharged after 3 days. He is medically sound and healthy now.

The praises for the hospital are being poured as the hospital is just two months old yet is equipped with experienced staff and doctors along with reliable medical equipment.

The professionalism, dedication and hard work of the staff is worth appreciation. It is truly the leading private sector hospital in Saudi Arabia.