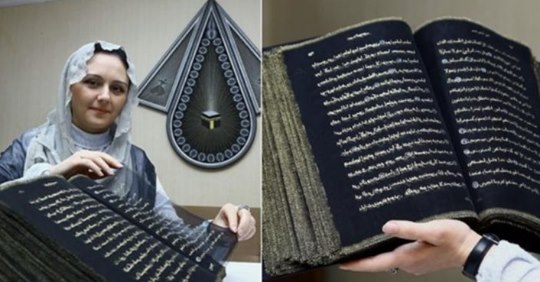 
Different people have different capabilities and capacities. The artists around the world have been able to amaze us with their masterpieces: beauty, creativity and the hard work are reflected in their work.

Similarly, a Muslim female artist has finally unveiled her masterpiece which took her three years to create. The precious piece has worth billions. It is a hand-painted Holy Quran. The specialty of it is that it is painted on the finest silk with embroidered gold bordered. Gold pain is used to jot down the verses.

The gold and blue combination are appealing to the eyes and worth the years spent on it. Tunzale Memmedzade is the artist behind it. She belongs to Azerbaijan. She said that she had this in mind that she needs to rewrite the Holy Quran.

In her research she found that nobody had re-written it on silk. So, she searched if it is permissible to rewrite the Holy Quran on silk and thereby on acceptance, she started off.

She searched for the finest silk available and selected the blue color. From time to time, people pull off the most magical deeds. Things that leave a person mesmerized. A similar feat has been achieved by a Muslim painter, who spent 3 years of her producing art worth billions.

This is the story of Azerbaijani painter Tunzale Memmedzade. Tunzale spent 3-years, dedicating her life to rewriting the Quran with gold on silk pages. The result is so captivating that it would even melt the heart of an atheist.

Tunzale project of rewriting the Quran started after she investigated the process of rewriting the Holy book. The Quran has been rewritten on so many different materials, but Tunzale found out that nobody had written it on silk.

As a reference, she took the official version released from the Diyanet, the Turkish Presidency of Religious Affairs. For the creation of this masterpiece, it took more than 3 pints of liquid gold with some silver. The canvas used for this Holy Quran is 164 feet of 11.4″ x 13″.