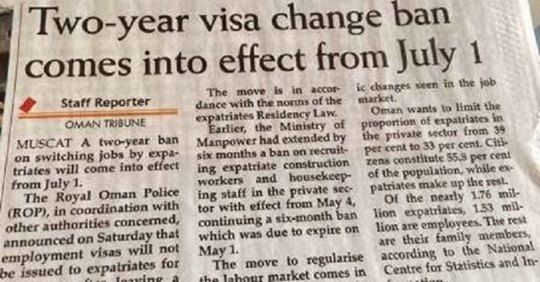 
This topic has been in the discussion for a long time. People ask if they are allowed to change their sponsor within two years of joining. Well, the answer to this question is not simple “Yes or No” given the scarcity information available in Saudi Arabia.

Keeping in view this situation, I decided to write something about this topic to clear the misconception of people. Two years of rule of transfer of sponsorship is a matter of concern for the people who come to Saudi Arabia recently or the people who have recently switched the job.

Rule Initiated: The rule that an employee cannot get transferred to any other employer or Kafeel before completing two years of employment with him came into force in 2010 to stop the illegal trade of visas or more commonly known as free visas.

It reduced the number of visas sold by the Saudi people but still, Companies were able to take transfer of visas even before completing two years with the previous employer. Government relation officers of the company who have strong relations with the people from Jawazat could do it easily.

The government relaxed this rule of two years of sponsorship as well during that period.  Any person could change his sponsorship to his actual employer before completing two years of employment with the previous employer.

New MOL directive on sponsorship transfer: Saudi Gazette reported on September 20, 2014, about a new directive from Ministry of Labor under which they have waived the rule of two years for the transfer of sponsorship.

It is great news for expatriates living in Saudi Arabia. Now they are free to move to any employer without completing any time period. This news has been taken very positively in the expatriates’ circle of the workforce in Saudi Arabia.

Businessmen have also welcomed this news. Many people who come here on a free visa would also be very happy to know about this. It is a major cause of concern for newcomers in Saudi Arabia.

With this rule, the newcomers are less likely to be exploited by their Kafeels or sponsors. Overall, I really appreciate this positive step taken by the Ministry of Labor in this regard.