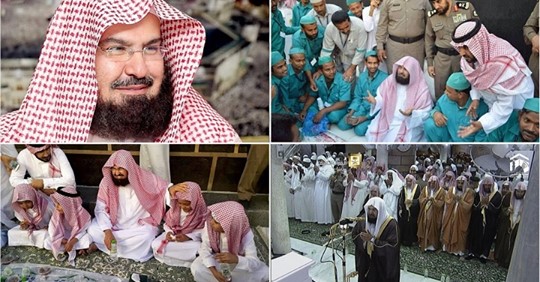 When I started hearing his recitation, I wanted to pray behind him. Allah the Almighty helped me and fulfilled my desire. Let us share some lesser-known facts about Imam Al-Sudais.

What is the Salary of Imam Sudais?

I don’t know if it is true but let me tell you about my personal experience. I was in another country and sitting in a religious gathering. Imam Sudais was also visiting that country during those days.

The speaker of the religious conference had met Imam Sudais a couple of days ago. He told all of us that before meeting Imam Sudais, he was curious to know about his salary. Out of curiosity, he asked this question from the Imam but Imam Sudais did not answer it.

Later on, one of the people who came along with Imam Sudais from Saudi Arabia told the speaker of the conference that Saudi Government has told all the Imams of Haramain that they cannot pay them for their services.

Services provided by these Imams cannot be quantified in terms of money. Saudi government just pays them a blank cheque every month and asks them to fill it as per their needs. Subhan Allah! This is the positive side of Saudi Arabia which no one tells you.

2-He was born in the year 1960 in the capital of Saudi Arabia, Riyadh. He belongs to Anza clan.

5-He has served in Riyadh University and then in Umm ul Qura University as Assistant Professor.

6-He was selected as Imam in the Grand Mosque when he was only 24 years. He delivered his first sermon at an age of 24 years in the month of July 1984.

7-In the year 2012, Al Sudais was appointed as head of Presidency for both the Holy Mosques and was given a rank of minister.

8-It is also said that the mother of Imam Abdur Rahman Al-Sudais used to curse him in his childhood with this statement “May Allah make you the Imam of Haramain”. He believes that he has become Imam just because of the prayers of his mother.

9-Sudais is also famous for his heart-touching style of recitation of the Holy Quran and his voice.

10-He is not only the Imam of the Holy Mosque but he also keeps an eye on the problems of Muslim Ummah and plays a vital role in this regard. He was titled an “Islamic Personality of the Year” in the year 2005 by Dubai.

11-He played a vital role in the war against terrorism and clarified that “explosions, suicide attacks, and terrorism” are totally repugnant to the injunctions of Islam.

12-He also criticized the international powers on the silence about the worst treatment of Palestinians by the Israeli settlers, he criticized the state of Israel and called the Muslims to send more aid to Palestine.

13-Al Sudais also talked about the concept of the Muslim Brotherhood and urged the Muslims all over the world to help the Muslims in Palestine, Iraq, Somalia, and Kashmir.

14-Imam Al Sudais, through his sermons, yelled on the believers to help their Muslim brothers of war-torn regions of the world. He actively spoke against the genocide of Palestinians and demanded medical supplies and eatables be sent in bulk to the oppressed people of Palestine.

15-He condemned the “Lal-Masjid” administrators on their role during the Lal-Masjid (red mosque) crisis in 2007, in Islamabad the capital of Pakistan.

He insisted that the militants of Lal Masjid and officials of government shall resolve the matter peacefully through dialogue and negotiations. He urged both the parties to consider it their duty to not to damage a piece of land.

16-In the pursuance of his struggle for interfaith harmony, Al Sudais led a prayer among a gathering of 10,000 for inter-faith harmony and peace in the year 2004 in London.

Prince Charles, as he was not in the UK, participated in the ceremony through a recorded video message. Minister for Racial Equality attended the sermon while the Chief Rabbi named Jonathan also supported the event by sending a message of support to Al Sudais.